JACKSON – It’s perhaps only fitting that a man of God turned to scripture to offer praise to those who have defended, and still defend, this great nation. 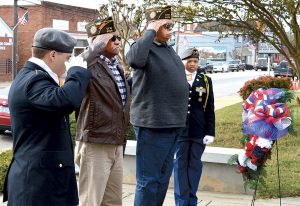 Two VFW members are flanked by Northampton County High School JROTC Cadets as they offer a salute to a wreath laid as part of Monday’s Veterans Day ceremony held in Jackson. Photo by Danny Bowman Jr.

Rev. Dr. Orr opened his remarks with a prayer, saying, “Part of our theme today is the motto of the Veteran’s Administration. It is taken from President Lincoln’s second Inaugural Address. Remember to care for those who have borne the battle and their widows and their orphans. So, remember to care and go a little further and commit to honor. When I say commit to honoring the service of Veterans by following the motto of the Veterans.”

He said his wife was teaching the children of their church a Bible verse from Matthew, Chapter 5/verse 9, which reads, “Blessed are the peacemakers for they are the children of God.”

“In conclusion, I say to the Veterans, it matters to a higher service, continue to serve, be the problem solvers and the peacemakers,” Rev. Dr. Orr concluded. 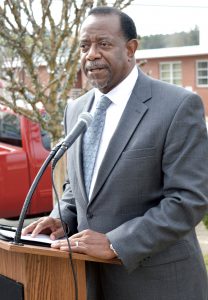 Reed also led the Pledge of Allegiance following with the recognition of the Veterans. Each Veteran stood and stated their name and rank.

The laying of the wreath was performed by the JROTC. Taps was played by Cadet Patrick Branch of JROTC beside a vacant chair draped with a MIA Flag signifying lost and fallen soldiers.

Closing remarks were made by Reed.

Sheriff Smith concluded the ceremony with a benediction.

Everyone was dismissed and invited to reassemble at the Wellness Center for a dinner and program further honoring the Veterans.

AULANDER – A hunting rifle taken in broad daylight from a man’s truck has been recovered by Bertie County Sheriff’s... read more