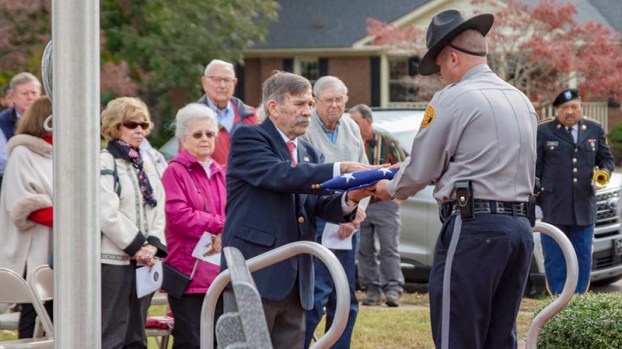 “Today is a celebration of all our veterans,” welcomed Mayor Hal Thomas as he recognized the retired service members in attendance, some serving as recently as the Afghanistan conflict and others as far back as World War II.

The featured speaker for the event was retired Marine Corps veteran Richard Todd who currently serves as the advisor for the Chowan University Military Support Club.

“We started it last year, and this year it’s started taking root,” Todd explained, noting they have 12 members so far. “It’s growing and we hope to continue to grow.” 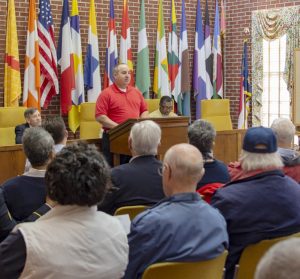 Participants include military members, veterans, and even dependents of veterans. Todd said the group has worked to serve the local community in different ways, such as serving a meal to Chowan students staying on campus for Thanksgiving last year and hosting a local ROTC competition.

“We hope to do more things, and get more involved in the community,” Todd continued.

In his remarks, Todd also shared some personal stories about how serving in the military had been good for him. The GI bill, he said for example, helped send him to Chowan University for a college degree.

“I probably never would have gone to college without it,” he said.

He also emphasized the importance of family support for people who serve, noting that several members of his family and extended family served in different branches of the military as well.

“I’d like to give a special thanks to the spouses of veterans. Without the spouses and families, it’d really be hard for veterans to do what they do,” Todd continued.

To people considering military service, he stressed that it’s a rigorous job but “anything worth having is hard.”

Todd concluded his short presentation by introducing a few members of the Military Support Club that were in attendance, which included his wife Angie.

After Todd’s remarks, the Veterans Day program concluded with the ceremonial changing of the flag in front of Town Hall. Mayor Thomas explained that each year on Memorial and Veterans Day, they fly a special American flag donated to the town. That particular flag was presented to Murfreesboro in 2007 after it had previously flown over the US Capitol on Mar. 1 the same year.

Members of the Murfreesboro Police Department, Chief David Griffith, Sergeant Bryan Johnson, and Captain James Dilday, participated in the changing of the flag.

Other people who participated in Monday’s event were Rev. Trey Gilliam, Raymond Eaton, Larry Gaines, and Pastor Berna Stephens. The wreath was donated by Murfreesboro’s Coffee Club, and refreshments afterwards were catered by Mary Etta Flowers.

AHOSKIE – Military veterans of all ages and branches of service gathered here Monday morning to celebrate their day, but... read more