SMITHFIELD, VA – Juanita Kelly Pond of Smithfield, VA died on Monday, November 11, 2019 at age 72 following a period of declining health. She was the spouse of Charles B. Pond, III. A native of Chuckatuck, VA, she was preceded in death by her parents John and Emma Mae Kelly. She is survived by her husband and his sister, Caroline. 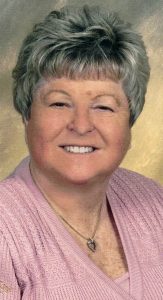 Juanita graduated from the Chuckatuck High School and attended Old Dominion University. She was a retired educator, having served a 33-year career at the Oakland Elementary School. Growing up in the Oakland Christian Church in Chuckatuck, she loved animals, especially cats. She was a member of the West End Baptist Church in Suffolk, VA, and an avid supporter of the North Shore Animal League. Juanita enjoyed traveling to various places–the theaters of Lancaster, PA were her favorites. She, along with Charles, was a strong supporter of intercollegiate athletics at Chowan University and the University of North Carolina at Chapel Hill. The Pond Football Center on the Chowan University campus is named in honor of the Ponds. A major residence hall in the Whites Crossing Complex of Chowan University is named in her honor. During her last years—when she was frequently confined to the house—she became a devotee of television programs, especially western movies.

The Ponds also supported the Chowan Christian Service Association of Chowan University, which provides scholarships for ministerial students and assists with international mission trips made by university students. She enjoyed music and for several years, the Ponds have sponsored Chowan University choir concerts at the Suffolk Center for Cultural Arts. She also enjoyed athletic contests with the Chowan University Hawks, the University of North Carolina Tarheels, and the Norfolk Tides being her favorites.

A memorial service will be held on Thursday, November 14, 2019 at 11 a.m. at the West End Baptist Church in Suffolk, VA. The service will be conducted by the Reverend Dr. M. Christopher White, Chancellor of Chowan University, and Reverend Dale Peterson of West End Baptist Church. Visitation will be held on Wednesday, November 13, 2019 from 6 to 7:30 p.m. at R.W. Baker & Co. Funeral Home and Crematory. A private burial will precede the memorial service in the cemetery of the historic St. Luke’s Episcopal Church in the Benn’s Church Community near Smithfield, VA.

Memorials may be made to the Juanita Kelly Pond Missions Endowment Fund Chowan University, Attention Office of Development, One University Place, Murfreesboro, NC 27855. Condolences may be registered at RWBakerFH.com.