AHOSKIE – Military veterans of all ages and branches of service gathered here Monday morning to celebrate their day, but the one who stole the show stood a couple of feet tall, was hairy, and walked on four legs.

“Holly” – a retired bomb-sniffing German Shepherd from the U.S. Air Force – proved as the most popular attendee at a Veterans Day ceremony hosted by American Legion Post 102 of Ahoskie. The annual event, which included a parade that preceded the 11 a.m. ceremony, was held at No Man’s Land Park on Main Street.

U.S. Air Force Staff Sgt. (Retired) Donnie Taylor, a 40-year member and former Commander of Post 102, who pulled two tours of duty in Vietnam where he specialized in training service dogs, served as the featured speaker. 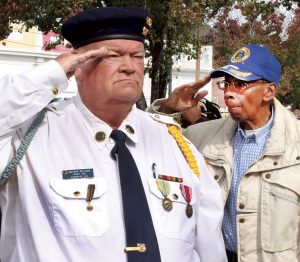 Retired members of the U.S. Armed Forces offer a salute as the National Anthem is played on Monday at No Man’s Land Park in downtown Ahoskie where Legion Post 102 conducted its annual Veterans Day ceremony. Staff Photo by Cal Bryant

He marveled at the large crowd gathered for Monday morning’s event, which was held under ideal weather conditions.

“I’ve seen times, years and years ago, when we would struggle to see 10 people show up, and just look at us now,” he observed.

Taylor stressed the importance of the American Legion’s presence locally.

“We do a lot of things here, to include putting American Flags on the graves of our Veterans across Hertford County for Memorial Day in May,” he said. “We’ve been doing that for a long, long time.”

He noted the significance of Monday’s ceremony, a celebration marking the end of World War I (formerly known as Armistice Day) held at the 11th hour, on the 11th day of the 11th month.

“We’re here today to honor all Veterans,” Taylor announced. “They are the ones, living and dead, who made possible the freedoms we enjoy today.

“But freedom really isn’t free,” Taylor continued. “We’re here today because of somebody’s sacrifice, be it giving of their time, shedding blood, and even giving their lives so we can enjoy all our freedoms today.”

He stressed that history often tends to repeat itself.

“So pay attention to what’s going on all over our world, to include right here at home,” Taylor remarked. “What goes around comes around, our history books tell us that. We’re only one generation away from losing our freedom. How can that be? When we stop teaching our children about all the past wars and the lives sacrificed, we lose our history and eventually our freedom.” 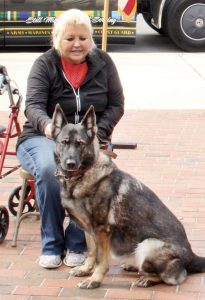 The star of the Ahoskie event was “Holly” – a retired bomb-sniffing dog used during several tours of duty in Afghanistan. Staff Photo by Cal Bryant

Taylor had a word of warning of those thinking that a Socialistic style of government is the key to America’s future.

Taylor then introduced his special guest and the star of the day – ‘Holly.”

“She came here by adoption after several tours of duty in Afghanistan,” Taylor told the audience. “She’s a bomb-sniffing dog. I guess ya’ll noticed her looking around. It isn’t because she likes you; she’s waiting to react to a smell, a scent she’s trained to track.”

He noted that the use of dogs in the military goes back to World War I.

“There have been thousands of them to serve over the years,” Taylor said. “When I was serving in Vietnam, we had about 4,000 dogs that we trained to perform all sorts of tasks. Only 200 of them made it back to the States; the rest of them were euthanized.”

Taylor closed by again saluting the “two-legged” Veterans in attendance.

“We’re a great nation, a free nation thanks to ya’ll. Thank you for your service and God bless you all,” he stated.

Post 102 Commander James Hutchinson presided over the ceremony. He touted the significance of the local Legion Post, noting its involvement with local youth – to include summer baseball – an active Ladies Auxiliary, Sons of the Legion, and hosting the local chapter of the Vietnam Veterans of America. He said the Legion Riders is currently in the process of establishing a local chapter at Post 102.

“We have worked hard to make the Parker Veterans Center (Post 102’s home on McGlohon Street) a place that we can all be very proud of,” Hutchinson said.

“It’s important for every Veteran, regardless of what branch of service you were in, what rank you held, to be a member of the American Legion,” Hutchinson added. “Please consider joining us. We are Veterans helping Veterans and our local community as well as across the state and nation.”

Additionally, a “Ride of Pride” truck took part in the parade and provided a scenic backdrop when it parked along Main Street at the ceremony.