There’s a terror threat of some type at a school or in a county building … law enforcement is en route … but because the premises went into lockdown, the “good guys” can’t get inside to aid, command, and assist because they’ve been locked out.

Well, not any more.

At the October meeting of the Bertie County Commissioners, Sheriff John Holley and Chief Deputy Kenny Perry explained to the board that lockboxes have been installed on the campuses of the county’s public schools, at the private schools, and within county buildings. 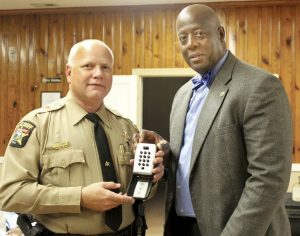 Bertie County Sheriff John Holley (right) and Chief Deputy Kenny Perry display one of the 45 lockboxes that have been installed at every school and select county buildings. The device allows quick access to a facility for first-responders in case of a lockdown. Staff Photo by Gene Motley

“We still do active training on shooters at schools, which some of you are familiar with,” said Holley. “The problem we have is that a lot of times when you called to the schools and they’re on lockdown, then we can’t get in; and that’s a big problem.”

Holley said what’s needed is something that allows these first responders access. After consulting with Perry, the Sheriff said they came up with something called ‘lockboxes’.

These lockboxes, a total of 45, are located at each school and county facility. They contain a master key that law enforcement officers can access during lockdowns or events of emergency.

“This will allow us quicker access to the buildings because everyone knows it’s our job to get in quickly and take out the threat,” Holley continued. “This way we’ll save time, and we’ll save lives.”

Perry then displayed one of the boxes for viewing. It is made of high grade sturdy zinc alloy for durability, and as protection from not only the elements, but vandalism as well. It has a quick release of the small door upon opening with a combination or a safely held pass-key.

“We had a couple of issues at the schools last year with bomb threats, and we couldn’t get into the building,” said Perry. “I went to the County Manager and they came out of the Sheriff Department’s budget and we were able to get 45 of these.”

Perry said the combination-code is known only to the dispatcher. Once a threat is called into the Sheriff’s Office, the dispatcher alerts someone with the code, allowing entrance to the building.

Perry said as of early October, installation had been done at all the schools, except Askewville – where completion was expected within a week.

“We had five left over, so we put two in the Courthouse and one in the County Office Building in case we needed to get in there,” Perry stated. “That helps in case of fire, or if anything occurs after-hours.”

Commissioner Ron Wesson inquired if the key for entry to the lockbox for the Courthouse was a universal key that could be duplicated. He was told there is a Master key in a special location.

“Right now, Bertie County is so far ahead of other counties in the area as far as school safety and safety initiatives,” said Commissioners chairman John Trent. “We’ve had several drills with rubber bullets participated by Emergency Services, the Sheriff’s Department, and the schools’ security team.”

Perry added that lockboxes have also been installed at the Clerk’s of Court’s Office and Register of Deeds department – two areas where employees can lock themselves in the vault in case of a threat.