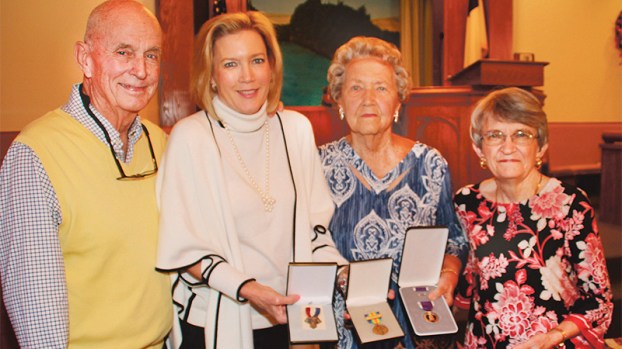 Wiggins now has three new memories to add to her 92-year-old collection.

During a ceremony held Nov. 2 at Sandy Cross Baptist Church, Wiggins was presented with three medals, including the prestigious Purple Heart, earned by her father for his service and heroism during World War I.

The presentation of the awards came through the efforts of the Veterans’ Legacy Foundation, founded in 2000 and based in North Carolina (Harnett County). That organization helps veterans and their families obtain the recognition they deserve so that their military legacy can be passed on to future generations. 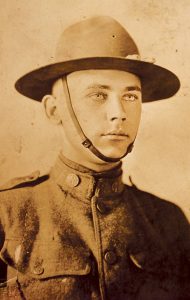 Thomas J. (“Tommie”) Stallings joined the military at age 19 and was severely wounded during World War I.

John Elskamp, founder and Executive Director of the Foundation, said he feels the hard work that his organization does pays off on events such as this one for Stallings.

“It’s a chance to celebrate these brave veterans for their accomplishments and to say thank you,” said Elkskamp. “Mr. Tommie Stallings served his country with honor and distinction and we’re here today to celebrate that.”

In addition to the Purple Heart, Wiggins was also presented, on her father’s behalf, with the World War I Victory Medal, and the North Carolina World War I Service Medal. The latter medal, approved by the state’s General Assembly in 1919, is one of only a few remaining.

The Purple Heart was not presented during World War I for those suffering combat injuries or death. It was later deemed to be presented retroactively from on or after April 5, 1917.

“Many times, many awards are approved after a veteran has left the service and therefore never presented, as it was in this case,” stated Elskamp. “But today we are correcting that.”

Wiggins shared the family’s side of the story. She first thanked Deborah Johnston, a family in-law, for her research work

“I never heard my daddy mentioned anything about going to war except on one occasion,” Wiggins noted. “I thank Deborah for all her hard work finding a lot of his military information on the Internet.”

Wiggins said her father was born Feb. 27, 1897 in Perquimans County.

“All I know about his childhood was that he went to school at Hickory Cross,” she stated. “Imagine my shock when I later read on his Army enlistment papers that he had a third grade education. I’ll never know how he learned to read and write so well. He always read the daily newspaper and had a great sense of humor.”

At around age 10, Tommie Stalling’s grandparents passed away, and his mother and father moved the family into the grandparent’s old farmhouse on an adjoining farm they had purchased just across the line in Gates County.

By 1917, Wiggins said her father and other men from Gates County enlisted in the Virginia National Guard. At that time, he was working as a clerk at a local mill.

“He was courting my mother (Eva Ward) at the time he enlisted,” Wiggins said.

Wiggins held up a treasured family heirloom, a 100-year-old post card sent by her father to her mother once upon his return stateside from the war. The card read: “Arrived today in the good old USA, it certainly looks good to me. Feeling fine and dandy; sure anxious to see you. Will write a good letter soon. Remember me to all. You know I send love, lots of love and then some, forever.”

“This card was sent to a girl who later become my mother and she kept it all these years. There’s no amount of money that could buy this card from me,” Wiggins stressed.

She continued by saying once her dad returned home to Gates County, he went back to work at his former job. During the Depression years, Mr. Stallings began to farm, working hard to eventually send his children to college. 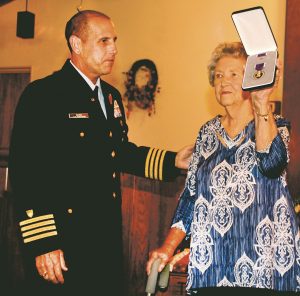 The family’s military history goes all the way back to the Revolutionary War with General Joseph Riddick. Two members of the Stallings family were killed in action during the Civil War.

“My dad was dedicated to this church, community, county, state and country,” Wiggins proudly said. “He was very active in civic affairs until his sudden death in 1961 at the age of 63. He was a Gates County Commissioner at that time.

“My family is proud to have had a father, a grandfather, and a great grandfather whose character was described as excellent. Thanks to all of you who came here today to honor this man,” Wiggins concluded.

“We are able today to recognize one of the great heroes from the Great War,” Keith said.

From a military standpoint, Keith said Stallings, at the age of 19, enlisted in Company F of the 4th Virginia Infantry in May of 1917. Company F was better known as Smith’s Volunteers, commanded by Captain Otis S. Smith Jr.

In August of 1917, Company F departed Norfolk, VA by train for Camp McClellan in Alabama for basic training. It was there that Stallings and his comrades joined the 116th Infantry Regiment of the 29th Infantry Division.

On June 12, 1918, the 116th Infantry left Camp McClellan, bound for New Jersey where they boarded a transport ship that would carry them overseas and into battle.

Several months later, Stalling had undergone two promotions and held the rank of Sergeant. By that time the 116th Infantry was engaged in battle as part of the American Expeditionary Forces assigned at the center sector of Hope Alsace in France. That area was part of the Meuse-Argonne Offensive, a push by the American forces against the Germans. That battle, which involved 1.2 million American soldiers, lasted 47 days and claimed over 26,000 lives who were fighting for the Red, White & Blue.

“It was the largest and bloodiest offensive of World War I, one that brought the war to an end and one that Tommie Stallings was involved in,” Capt. Keith noted.

Stallings was severely wounded in the chest while in battle on Sept. 1, 1918. He remained under medical care in France and was still on foreign soil when the Armistice was signed on Nov. 11, 1918 that eventually bought World War I to an end.

On April 5, 1919, the 116th Infantry was selected by General John J. “Blackjack” Pershing to parade at General Headquarters in France. They soon after departed foreign soil, arriving back in Newport News, VA on May 20, 1919. There they paraded under the famed Victory Arch to the delight of a large crowd and then left for Richmond, VA where they received another rousing welcome home.

For more information about the Veterans’ Legacy Foundation, contact Elskamp at acjohn103@charter.net or call 910-574-1737.

WINDSOR – Just an imaginary scenario …. There’s a terror threat of some type at a school or in a... read more