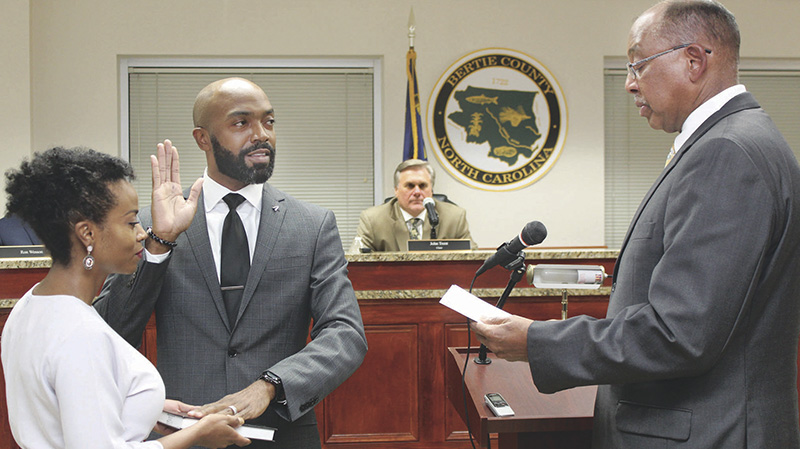 WINDSOR – Maybe it’s his analytical mind. After all, he is a mathematician; and you can add engineer to that list also.

But as of earlier this week, Juan Vaughan II will answer to ‘Bertie County Manager’. An interim title … for now.

As successor to the retired Scott Sauer, who held the top post for six years, Vaughan came to Bertie County as Assistant County Manager a little more than five months ago after holding a similar post within Hertford County government for two years.

“There are a lot of great things going on in Bertie right now,” he said, a tone of excitement and anticipation within his voice.

Like his predecessor, Vaughan will manage and coordinate the day-to-day administration of all county government operations and agencies. Both the months in Windsor, and the years in the neighboring county have prepared him well.

“The similarities are abundant as both counties are rural northeastern counties in North Carolina; that alone comes with its own set of challenges,” Vaughan noted. “One of the biggest differences is the repeated flooding that Bertie has experienced. Our Bertie citizens are very resilient and the County is involved in several recovery efforts to restore what has been lost and to reduce flood loss as much as possible in the future.”

A graduate of Hertford County High School, Vaughan holds dual degrees (engineering and mathematics) from North Carolina A&T State University and Elizabeth City State, where his emphasis was on Community College teaching. He spent eight years at Roanoke-Chowan Community College in various capacities, including Compliance and Data Director, Mathematics Instructor, and Lead Faculty to the Mathematics, English, and Physical Education & Health Departments. All before his career move to local government.

A member and trustee of Roanoke Salem Missionary Baptist Church in Garysburg, Vaughan is a member of Kappa Alpha Psi Fraternity, Inc. and serves as on the Board of Directors for Vidant Roanoke-Chowan Hospital.

“I am committed to contributing to the growth of the community that has provided the foundation for my career and educational success. I hope to forge a relationship with the Bertie Board (of Commissioners) that is team-oriented and is built on values that will put the needs and interests of Bertie citizens first,” he stated.

Vaughan is married to the former Austin P. Hill of Lewiston-Woodville, and together they have a daughter, Adé Alexandra.

As for Bertie County, his keen awareness of challenges has prepared him for future undertakings, and hopefully on a path to positive solutions.

“There are new projects that are ongoing and some hurricane recovery is still underway as well. I plan to continue building on the foundation that has been laid and oversee the projects and recovery efforts to completion,” he stated.

At the Nov. 4 Commissioner’s meeting – the first one he oversaw – Vaughan heard discussion on the possible re-introduction of a referendum on the local option quarter-cent sales tax; possibly as early as 2020.

“(Bertie) County must make sure that the citizens have a thorough understanding of what they are voting for,” Vaughan acknowledged. “Hearing the word “tax” can be very scary and off putting. The thought of paying more money, not knowing where it’s going, and having no input in where it goes doesn’t sit well with a lot of people, and understandably so.”

“The Bertie County Board of Commissioners have decided that the additional funds generated from the one-quarter cent sales and use tax would go toward supplements for employees of Bertie County Schools. As much as we value education and youth in our community, it’s hard not to make the investment of an additional quarter of a cent per dollar spent in Bertie County,” he said.

The Commissioners expressed their faith in Vaughan’s ability with his May appointment, and that has not wavered in the least as he accepts new duties.

“Our county staff have juggled multiple projects and have been balancing our efforts to work on new ones,” explained Bertie Commissioners chairman John Trent.

“We wanted to be sure that Mr. Vaughan will be an asset for the County Manager, and be certain that the pair will be able to form a strong working relationship,” said vice-chairman Greg Atkins. “I believe that we have achieved our goal.”

“Bertie County has an aggressive set of priorities, and we must be prepared to add capacity to expand our productivity” explained Commissioner Ron Wesson.

“We put a lot on our (previous) County Manager, and as Commissioners we need to provide support to help carry the load on these projects,” said Commissioner Tammy Lee. “I have heard a lot of positive comments about Mr. Vaughan and we are lucky to have him.”