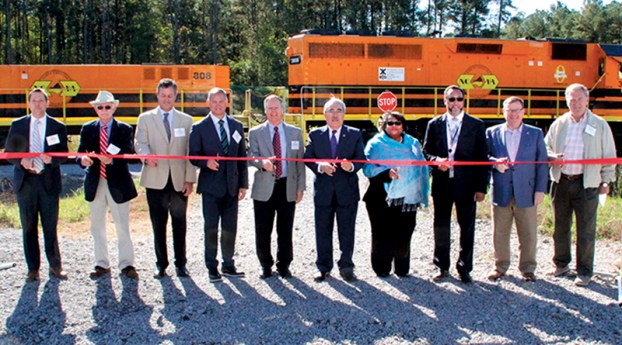 COFIELD – On budget and on time.

Local, state, and federal officials celebrated here Nov. 1 the successful conclusion of an $11.6 million project that not only benefitted the local North Carolina-Virginia Railroad Company (NCVA) and its customers, but also will play a major role in helping to attract new businesses along the 52-mile rail line that serves Hertford, Bertie and Northampton counties, from the Nucor plant to the main CSX rail line in Boykins, VA.

The project, which launched in December of 2016, improved the local rail line to allow it to increase the loaded weight of rail cars to 286,000 pounds and for those cars to travel faster (25 mph). All totaled, the project included 30 miles of new rail, 10,000 new rail ties, and upgrade of 12 rail bridges, especially one over the Meherrin River north of Severn. 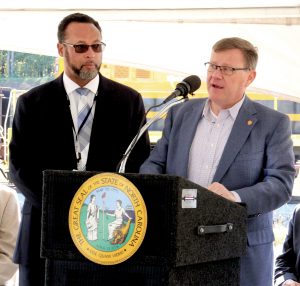 Joined by local State Representative Howard Hunter III (left), Tim Moore, North Carolina Speaker of the House of Representatives, shares his thoughts on the completion of an important rail project in the Roanoke-Chowan area. Staff Photo by Cal Bryant

NCDOT secured half of the funding through a federal grant from the Transportation Investment Generating Economic Recovery (TIGER) program. The balance was covered by an investment of $3 million from NCVA and $2.8 million of state funds.

Butterfield praised all the stakeholders involved in the project, citing the work of NCVA, NCDOT, USDOT, and Nucor.

“NCDOT is the unsung hero in this,” Butterfield stated. “Through their advocacy, money was secured for the Northeastern North Carolina Rail Improvement Project through the TIGER program.”

Nationally, TIGER invested over $780 billion into various grants to help communities across the nation.

“In this case, these funds were used as an investment in our state’s rural communities,” Rep. Butterfield noted. “I was proud to support this project, but I didn’t do it alone. This project helps Nucor and other NCVA customers and will help our region attract more companies that require competitive rail service. I’m excited over the prospects of job growth. This transportation improvement project allows for sustainable growth and success for generations to come.

“I thank Nucor for all they’ve done for this county and for all of northeastern North Carolina. I’m excited over the prospects of job growth,” Butterfield closed.

Jason Orthner, Rail Division Director for NCDOT, noted that the project helped NCVA increase its per car weight capacity while increasing the speed of the trains from 10 mph to 25 mph.

“All of this helps to bring products to market more effectively and efficiently over the North Carolina-Virginia Railroad, one of the state’s most important short-line railroads,” said Orthner.

“The project finished on time and within budget,” Orthner observed.

Andy Chunko, President of NCVA, touted the project as a great example of many partnerships that came together to make it happen.

“For a small railroad like us, this is transformational,” Chunko said. “It takes us to the next level, allowing us to not only better serve Nucor, but our other customers along our rail line.” 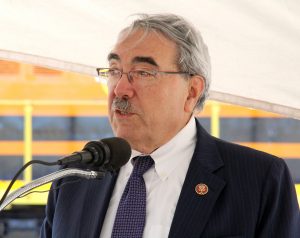 “From the state level this is truly a partnership in these types of investments,” Moore stated. “We’re making bipartisan efforts in the House that investments come to rural North Carolina. You can bet that when budget time comes, these two (Hunter and Goodwin) are in my ear about investments here in northeastern ‘Carolina.

“This project is a great investment of state and federal assets,” Moore continued. “By making the safety improvements, which increase the weight capacity and speed to market, allows for even greater growth along this rail line.”

Bob McCracken, General Manager and Vice President of Nucor-Hertford County, gave a bit of information about the local mill, noting that it has manufactured, since 2000, high quality steel plate – for building barges, bridges, ships, railcars, storage tanks, and wind towers as well as supplying the nation’s Armed Forces with many mission-critical steel products, to include armored plate for aircraft carriers.

“Just as we have significantly invested in our mill to become a more reliable supplier of these products, we are proud that our state and federal government have supported this investment and the critical transportation infrastructure that it vital to our nation’s economy,” McCracken observed. “The improvements that this TIGER grant funded are very important to companies like Nucor.”

McCracken noted that nearly 70 percent of the steel plate produced at Nucor-Hertford County is shipped by rail.

“The upgrades to the existing bridges and increased car loading improves freight efficiency for both Nucor and our customers, allowing us to better serve their needs,” he stressed. “We can’t wait to show our customers on how we can put this improved rail line to work for them.”

McCracken thanked Genesee & Wyoming, the parent company of NCVA, for their investment in the rail project and pursuit of government support for the improved capacity. He also thanked NCDOT for their involvement as well as thanking Congressman Butterfield for his work in helping to secure the TIGER grant.

Michael Miller, President of Genesee & Wyoming Railroad, said the three years it took to complete the project was well worth the wait.

“We are so thankful for our NCVA customers, without them and without the revenue and volume it takes to run this railroad, this project would not have been possible,” Miller stated. “We have worked aggressively to improve the infrastructure of this rail line, getting it to where we think is now the best in class for a short line railroad. This project un-impedes the connection between a rural corner of North Carolina to the national freight network, which makes every customer on this line more competitive and this railroad more attractive to attract new business, new industry and new jobs to this area.”

“These improvements allow the customers of this rail line to reach into the full North American rail network, helping them to compete in their marketplaces,” Vest said. “This type of improvement can be a catalyst for more industrial growth and more jobs to this area.

“When we first approached Congressman Butterfield about this project, he immediately understood its importance and the impact it could have throughout eastern North Carolina,” Vest added.