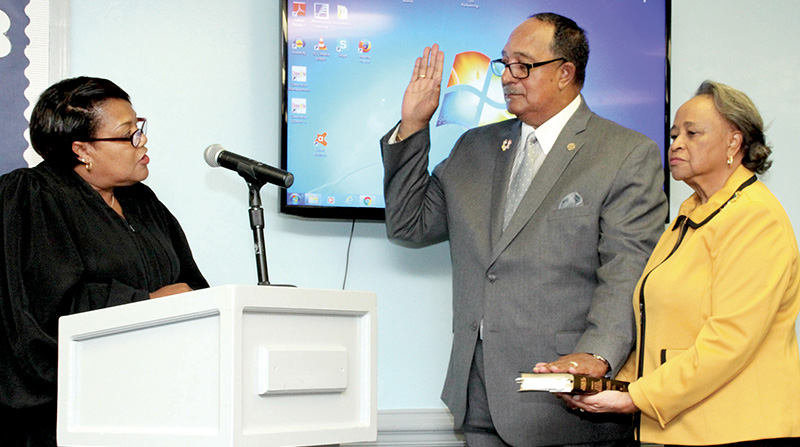 With his wife, Bettie (right), holding the Bible, J. Wendell Hall accepts the oath of office as a member of the North Carolina State Board of Education from Chief District Court Judge Brenda Branch at a ceremony held Monday evening in Winton. Staff Photo by Cal Bryant

WINTON – J. Wendell Hall’s nomination process to the North Carolina State Board of Education began with a phone call he almost didn’t answer.

Hall, a longtime local educational administrator and a 19-year veteran of the Hertford County Board of Education, was formally sworn-in to his seat on the state board here Monday night in front of a standing-room only crowd of family, friends, and public education colleagues.

After taking the oath from the Honorable Brenda Branch, local Chief District Court Judge, Hall shared the story of a phone call he received one evening roughly a year ago and his initial hesitance in answering that particular call.

“When my cell phone rings, if I don’t recognize the number, I don’t answer,” he said. “About a year ago I received a call from a number with a 917 area code. It kept ringing and my curiosity got the best of me and I answered. The person on the other end said, ‘good evening, this is Roy.’ He said he had looked at my resume and wanted to move forward with nominating me to the State Board of Education.

“That’s when it finally dawned on me on who Roy really was….our governor, Roy Cooper,” Hall chuckled. “That’s a true story. Now when I see that number pop up, I immediately answer.”

As typical of Hall’s demeanor, he refused to take the credit for this appointment – and subsequent election by the General Assembly – to such a prestigious state entity, a 12-member board responsible for managing the North Carolina’s public K-12 education.

“It’s not about me; it’s us; this position has been bestowed upon us here in the northeastern part of the state,” Hall noted.

He credited his wife, Bettie, for being with him every step of his educational administrative journey – one that includes a 14-year stint with the North Carolina Department of Public Instruction at its Northeast Regional Education Center in Williamston preceded by 10 years as a classroom teacher. He also served as Deputy Superintendent of Hertford County Schools, where he was twice named Interim Superintendent, and similarly led school systems in Northampton County, Weldon City, and Warren County.

“She’s been there for me for 57 years,” Hall boasted. “I could not stand here tonight and take this oath of office without her. And she’s here after undergoing major surgery on her heart.”

He thanked Governor Cooper for nominating him for a seat on the State Board of Education and praised NC House of Representative member Howard Hunter III for his work in the General Assembly for leading the charge on Hall’s confirmation process, which was completed in early October.

“I’m honored and proud to be one of the 12 members of the state board charged with the task of doing what’s best for the 1.6 million K-12 schoolchildren here in our state,” Hall remarked. “Our kids, our teachers, our administrators deserve the very best. Please keep me in your prayers as I work with my colleagues to take the education of our young people across our state to the highest level.”

Others taking part in Monday’s ceremony shared their thoughts on why Hall will be an outstanding asset to the state board.

“I’m so proud of Wendell Hall, he has worked tirelessly as a local board member and has served as the President of the North Carolina School Board Association,” stated David Shields, Chairman of the Hertford County Board of Education.

“With his knowledge, he will bring a lot to northeastern North Carolina that we have not had before,” Shields continued. “Our part of the state is often forgotten, but I can assure you that Mr. Hall is not going to Raleigh to be quiet. He will continue to be a great advocate for public education across our state, just as he is here in Hertford County.”

“This is big for Hertford County; we have a voice in Raleigh that we can trust; a voice of experience,” said Judge Branch just before administrating the oath of office to Hall.

Christian Reynolds, a junior at C.S. Brown High School-STEM, made remarks on behalf of the county’s students.

“We, the students of Hertford County Public Schools, are so grateful to Mr. J. Wendell Hall for accepting his position as a NC State Board of Education member,” Reynolds stated. “We now have someone to represent us who was born, raised, and attended our school district. We appreciate his dedication and hard work for our school district. We thank him for his leadership and commitment to Hertford County students, staff, and community.”

William Whichard, a Kindergarten teacher at Bearfield Primary School and Hertford County’s reigning Teacher of the Year, brought forth remarks on behalf of the district’s faculty members and staff.

“We are certain that he will listen to the concerns of not only the constituents of Hertford County, but of all the constituents of the northeast region,” Whichard added. “The employees of this district stand behind and with Mr. Hall as he lobbies for equality among the districts and the quality of education that is deserved by all students regardless of the economic status of the districts they represent. We know that Mr. Hall will take small town values to Raleigh to help build a stronger state.”

Hertford County Board of Commissioners Vice Chairman John D. Horton, a former member of the county’s school board, recalled his past association with Hall.

“I worked with Mr. Hall for 28 years; if there’s one person who loves Hertford County more than I do, it’s J. Wendell Hall,” Horton remarked. “Mr. Hall is a jewel. He is a natural born leader. I saw leadership capacity in him years and years ago. He will take that leadership quality to Raleigh, which will benefit everyone across our state.”

“We’re so proud of the fact that he has already served us in Raleigh on other boards, and now he will do it again on a larger scale as a member of the State Board of Education,” Wright said. “He will give our county and our part of the state some great exposure by being a member of the state board. We know that he will do what’s the best for the children of our state.”

Hall’s term is for eight years. His first meeting as a member of the State Board of Education is next week in Raleigh.

He is the father of one son, Jermain, and two grandchildren Jared and Kyndle.