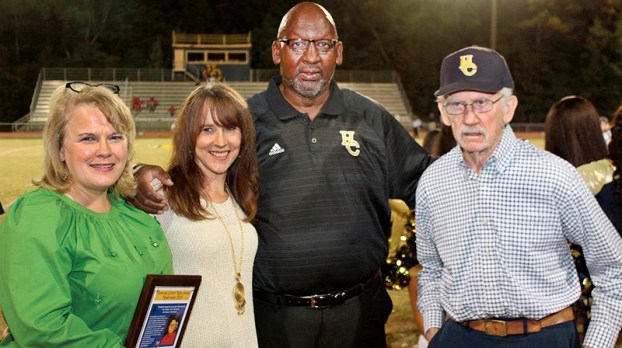 AHOSKIE – They get loud, and maybe that’s what keeps everyone else quiet.

Such is the life of the public-address announcer; that booming voice that comes over the loudspeaker giving you the information for an event; which in this case is Hertford County High School football.

And during his day, no one had better ‘pipes’ in a Press Box in this region than James “Jim” Shotwell.

A forester by trade, Shotwell is a NC State graduate and former paratrooper with the famed 82nd Airborne. He was also known more for his ‘night job’: the “Voice of the Hertford County Bears”, because while you couldn’t hear the players and the coaches down on the sidelines, Shotwell’s was the one you heard ringing in your ears.

With his family members and friends present, Shotwell was honored Friday night prior to Hertford County High’s Homecoming game, receiving a plaque

“He was the announcer for the old Murfreesboro High School for about 10 or 15 years,” said HCHS athletic director Charles Simmons. “Coach (Richard) Murray recruited him and when he came over here (1989), it was just a smooth transition because he stepped right in. From there, we listened to his voice for about 30 years.” 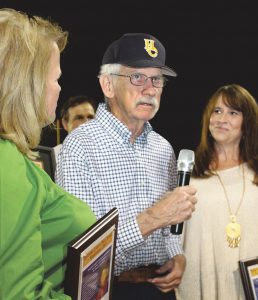 Before the game, Shotwell made his customary announcement describing the event and welcoming all to the game before turning it over to the school band for the playing of the National Anthem. Staff Photo by Gene Motley

Shotwell began his announcing career like most of us: as a fan. He patterned his announcing style on that of another Wolfpacker, NC State PA announcer C.A. Dillon, who was the voice of State basketball at Reynolds Coliseum and football at Carter-Finley Stadium for over 50 years.

“He knew them all,” Shotwell recalled about Dillon. “I always liked his intro because it was direct, polite, and it sounded halfway decent.”

You ask most anyone what made Shotwell such a good announcer and it would have to be his precision. He never wanted to mispronounce a name, even if it meant coming down from the Press Box in a driving rainstorm and asking a visiting coach for assistance just to make certain he stated a name correctly.

“He knew all the home-team players’ names, from freshman year to senior,” said daughter Elizabeth Sanders, who recalled her dad’s years of announcing at her alma mater of Murfreesboro High School, where she had once been a cheerleader.

“He said if there was a kid there that dressed out and made the play on the field, then they deserved to have their name called, and he did his best to make sure of it,” said Gattis Hodges, who did Bears football radio play-by-play, along with Jack Goldberg.

“Jim and I played ball against each other, so we knew each other real well,” related Hodges, a native of Woodland, who did HCHS football for 24 years. “I miss him dearly, because there were nights when it was just me, Jim, and the scorekeeper in the box once the game was over. We would do our Monday morning quarterbacking analysis right there on Friday night.”

“We played off each other,” joked Shotwell. “If Gattis said it was a five yard gain, and I said it was six, I’d change my call because I figured he had a better look at it. And sometime, he’d do the same thing; I think it helped us both give a better performance.”

“He was just a Hertford County High fan through and through,” added Simmons. “His breakdowns of the game were just unique.”

Shotwell, daughters Elizabeth and Beverly, along with grandchildren, stood on the tartan track that rings the football field on Friday night for the presentation. His wife, Linda Shotwell, was unable to make the ceremony, but was there in spirit.

Thirty years sure went by in a hurry,” Shotwell said, as he now spends his time between Murfreesboro, and with his children in Raleigh. I haven’t made many games this year, but I still support them.”

At the conclusion of the ceremony, he was handed the microphone for those famous words on this night to the delight of the Homecoming crowd. Once in place, what more could any announcer say, but…

“Good evening, ladies and gentlemen, and welcome to Bear Stadium, we’re pleased to have you with us tonight … and, now we ask you to stand and remove your hats for the playing of our National Anthem.”

WINDSOR – A sergeant at Bertie Correctional Institution and an unnamed inmate were both treated and released from outside medical... read more