GATESVILLE – After nearly a 90-minute discussion on the pros and cons of two financial options, the FY 2019-20 Gates County budget is balanced, without major departmental cuts as originally anticipated.

The decision, by a 3-2 vote, came here on Oct. 23 during a special called meeting of the Gates County Board of Commissioners. That elected body had first been advised last month of a $625,127 deficit in the current fiscal year budget, which was approved in June and became effective on July 1. Afterwards, the county learned that the deficit was caused by over-budgeting expected DSS revenue.

Some cuts had already been made using salary adjustments to three county positions that are currently vacant.

Option two did first require the board approving a resolution, one superseding all previous declarations, to recoup county money expended on the wastewater project. On a motion from Commissioner Jonathan Jones and a second by Commissioner Ray Freeman, that resolution was approved by a 4-1 vote (Jones, Freeman, chairwoman Linda Hofler, and vice-chair Jack Owens in favor with Commissioner Henry Jordan opposing). That resolution called for the reimbursement of $600,000 from the grants used for the wastewater project to the General Fund and the balance to the Enterprise Fund. 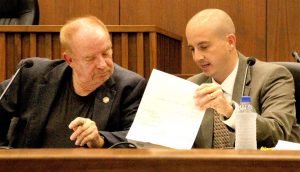 Jones then offered a second motion, seconded by Freeman, calling for balancing the budget through option two, using $454,431 from the wastewater project and adjustments to several line items in the General Fund budget, to include the part-time salary for a custodian position, travel expenses for Board of Elections members, DSS travel, Customer Service and Administrative contracts, funds from the Board of Adjustments and Planning Board (per diem money from their meetings) and funds from the Administrative Professional Services.

Based on early estimates, it appears there will be approximately $800,000 left over once the wastewater project closes. It was left to the discretion of the commissioners as to the exact amount that would go back into the General Fund and the Enterprise Fund.

The motion for option two passed by a 3-2 vote, with Hofler and Jordan opposing.

The early stages of last week’s meeting included comments from all five commissioners on the two options to balance the budget.

“I have gone on the record and will so again to say I’m not for cutting our school system’s budget or public safety,” said Jones. “We’re having to fix a mistake that happened. The LGC (Local Government Commission) that came and spoke to us said that we can fix it by using wastewater funds and not cutting our departments. We can go with option two, have a balanced budget and be done with this. I’m 100 percent behind option two.”

Later in the discussion, Rountree noted that if the commissioners decided on option two and if the recommendation was to move $600,000 from the wastewater project, $454,431 would be needed to balance the budget, leaving $145,569 into General Fund Fund Balance. She added that any funds left over from the project beyond that amount would be returned to the Enterprise Fund.

“Right now we do not know the exact amount of what will be left in the wastewater project budget once it closes out,” Rountree said. “We’re still waiting on reimbursement from one grant. We have to provide more documentation before we can collect.”

The board wanted to hear from Water Department Supervisor Timmy Hedgepeth regarding his concerns about the possibility that the full amount taken from the Enterprise Fund Balance ($481,560 moved on April 17, 2018 to help cover costs with the wastewater project) may not be returned.

Hedgepeth said the wastewater project – which was primarily built to serve the planned Merchants Commerce Park) – was not brought on line to make money.

“It was brought on line to create jobs, tax base, and tax revenue for the General Fund, not the Enterprise Fund,” Hedgepeth stressed. “The money fronted for the this project was split 50-50 from the General Fund and the Enterprise Fund with the understanding that when the project closed out, the funds left over would be returned by a 50-50 split between the same two funds.”

He added that revenue from the Water Department is used to maintain the sewer system, since the latter lacks the number of customers needed to break even.

“It (wastewater) will never make enough profit to sustain itself,” Hedgepeth noted. “How does this affect me? Option one gets you out of your pinch and rebuilds your General Fund faster vs. option two. Option two gives you a quick plug, but next year you have no revenue coming in for the General Fund and it leaves me with less money in the Enterprise Fund Balance to get started on our next project.”

As far as option one, Rountree stated it scaled back the original budget by making cuts to each of the county’s departments, as noted at a Sept. 27 special meeting of the commissioners. The three largest cuts in that option were the school system (approximately $45,000), the Sheriff’s Office (an expected $15,000 cut), and Social Services (nearly $11,000).

The lion’s share of covering the deficit through option one was Rountree recommending $350,000 be returned to the General Fund from the wastewater project and using the $111,000 increase in sales tax revenue.

Jordan stated he preferred option one, based on the county manager’s recommendation.

“She feels option one is the best way,” said Jordan, “she knows what the needs are of every department.”

“That option prepares the county’s departments for cuts that would be made next year (FY 2021-22) and helps to replenish the General Fund Balance,” said Rountree. “My preference is option one.”

“There are two options on the table; one is as good as the other,” said Freeman. “Option two contains no cuts to the departments and there is money available to take care of the situation. Option two is in my heart; it’s what our citizens want.”

Jordan put a motion on the floor, seconded by Hofler, to approve option one. That motion was defeated by a 3-2 vote with Jones, Freeman and Owens against the measure.

“I feel we should all bear the burden, all departments, and not pick and choose,” said Hofler. “This problem will face us again next year.”

“I would hope that the county manager talked to the department heads and the cuts she recommended I feel pretty sure that those departments gave her the thumbs up that the cuts were something they could deal with,” said Jordan. “Our county manager recommends option one and I feel we need to stand behind that and hold her accountable for it.”

“It’s not the fault of our departments that we’re here today (faced with the deficit),” stated Jones. “We shouldn’t be nickel and diming them to help balance the budget. We have an opportunity to fix this today and we have until June of next year to hash things out on how we cut the next budget (2020-21).”

In another matter handled at last week’s meeting, the commissioners, in a 5-0 vote, approved a measure to allow the Gates County School System to move forward with the paperwork in an effort to gain a $33,000 state grant to help pay for another School Resource Officer to be placed in the elementary schools. The county had to come up with $14,757.58 as matching funds for that grant, which will move an existing part-time deputy into a full-time position. Those matching funds were included within the revisions made in option two.

“This is a wonderful opportunity that I hate to see pass us by,” said Sheriff Ray Campbell in reference to the $33,000 grant. “We need to make this happen; having an SRO in our elementary schools is a win-win for everybody.

“We may not be looked at again if we pass up this opportunity. The grant money will go to another county,” Campbell added.

First at the Fair