AHOSKIE – In his role as “The Tarheel Traveler”, Scott Mason has treated his viewers on WRAL TV 5 to hundreds of interesting places and unique characters across the state.

One of his upcoming destinations is Ahoskie.

Mason will be the featured speaker at the annual Ahoskie Chamber of Commerce Membership Banquet. That event is set for Thursday, Nov. 7 at the Ahoskie Inn, beginning with a 6 p.m. social hour and silent auction followed by meal at 7 p.m.

Individual tickets are $35 per person. 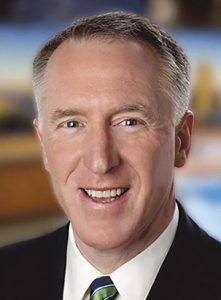 “You will be intrigued by the stories Mr. Mason will share from his journeys all across our great state,” said Amy Braswell, Executive Director of the Ahoskie Chamber. “I encourage everyone to come out and give Mr. Mason a warm welcome to Ahoskie.”

Mason, a broadcast journalist with 35 years of television experience, has won dozens of awards for documentaries, writing, and feature reporting, including three National Edward R. Murrow awards and 20 regional Emmys. He has twice been named North Carolina Television Reporter of the Year.

He has worked as a reporter and bureau chief for network affiliates in Chattanooga, Tennessee; Winston-Salem, North Carolina; and Dayton, Ohio. In 1991, Mason joined the PBS affiliate in Richmond, VA where he created, wrote, produced, and hosted a weekly newsmagazine. Virginia Currents won more than 100 awards for journalistic excellence during his six-year tenure. The U.S. Information Agency distributed the program to embassies worldwide.

His success caught the attention of WRAL-TV, the NBC affiliate in Raleigh. In April, 1997, Mason became the station’s Documentary Producer. He researched, wrote, and produced 10 documentaries before adding his talents to the nightly news team as a reporter specializing in features.

He is known today as the Tar Heel Traveler. His Monday-Thursday series on WRAL takes viewers along the back roads of North Carolina where he meets memorable characters, finds out-of-the-way places, and unearths fascinating historical footnotes. The series has become so popular it has led to Tar Heel Traveler half-hour specials, which he produces each quarter.

Mason lives in Raleigh with his wife, Nina, daughters, Lane and Genie, and son, Scout.

MURFREESBORO – An arrest warrant has been issued for the second suspect from an armed robbery which occurred at 158... read more