WINDSOR – Denied a trip to the finals a year ago in an upset, the Lawrence Academy tennis team left no doubt this second time around.

“They played hard today,” said Lawrence coach Lisa Corbett. “They set a goal and they went out an achieved it.”

That victory set up a showdown with top-seed Kerr-Vance Academy Saturday (today) at NC Wesleyan University in Rocky Mount in the NCISAA finals. The Spartans were one of the three teams that beat the Warriors (17-3) this year. 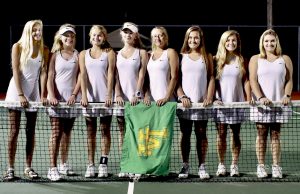 One of those other teams was Ridgecroft as both squads split their regular season meeting: each winning on their own home courts in Windsor and Murfreesboro.

Both ended in a 5-4 winning score.

Corbett admitted sweeping the doubles to open Wednesday’s competition was the key to the win.

The number-one doubles duo of Hailey Hope Gardner, the lone senior on the team, and Emma Cobb opened with a close 9-7 victory over Mattie Grace Gilliam and Claire Place, while the three-doubles team of Perris Clayton and Annie Hayes Trowell rolled in their 8-1 win over Camille Pierce and Elizabeth Brown. It took the number-two squad of Isabella Spruill and Lisa Kuschel to seal the sweep, but they needed a tie-breaker (9-7) to claim the win over Belle Turner and Gracie Boswell.

“We felt like we had to take at least two of the doubles, but once we got a sweep, I thought we had an excellent chance at a win,” Corbett added. “We felt very confident then that we could win the match.”

But the Rams did not go ‘sheepishly’ away. In what may be her final high school match, Ridgecroft’s one-seed, senior Mattie Grace Gilliam took LAW top-seed Cobb to a tie-breaker after splitting the first two sets 6-2, and 6-7. Gilliam claimed the finale, 7-4.

The Rams’ only other singles win was Turner over Gardner 6-2, 6-2, while Lawrence took the other singles with wins by Spruill, Trowell, Kuschel, and Clayton – who’s marathon with Boswell lasted well into darkness.

“(Kerr-Vance) is going to be a challenge, but it’s doable,” said Corbett. “They are solid fundamentally, but we are just as well, and I believe we have a very good chance.”

Northeast falls: Kerr-Vance Academy advanced to its second straight NCISAA tennis state final Wednesday with a 7-2 team win over Northeast Academy. Senior Carly Stephenson, playing in what could be her final high school match, won her singles match, 6-1 and 6-3; then teamed with Lizzie Smith to take a doubles win, 8-2. The Lady Eagles end their season at 8-6.