WINTON – His ability to lead plus the passion he has to use education as a means to mold and shape young children into responsible adults serves as the fuel that drives J. Wendell Hall’s internal motor.

Now, after guiding local public school systems as a classroom teacher, superintendent, and board of education member, Hall has the opportunity to take his talent to the next level.

On Monday, Oct. 28, Hall will take the oath of office as one of three new members of the North Carolina State Board of Education. His appointment to this high-ranking statewide board is a first in Hertford County history. 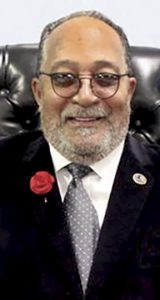 During a floating reception on Monday (6-7 p.m. at the Hertford County Board of Education Administrative Office, 701 Martin Street, Winton) held in his honor, Hall will be sworn as a State Board of Education member by the Honorable Brenda Branch, Chief District Court Judge.

“We hope that you will be able to join us for this unique opportunity to strengthen the voice of Hertford County Public Schools through Mr. Hall’s tenure on the State Board of Education,” stated Hertford County Schools Superintendent Dr. William T. Wright Jr.

The Hertford County Board of Education, on which Hall has served for 19 years and will remain a member, has its regularly scheduled monthly meeting on Oct. 28. They will hold a closed session from 5-6 p.m. and then attend the reception for Hall before holding the open session of their meeting at 7 p.m.

The primary responsibilities of the State Board include setting curriculum standards, reviewing and adopting instructional materials, establishing graduation requirements, and overseeing the NC Permanent School Fund.

The agency provides leadership and service to the 115 local public school districts, 2,500-plus traditional public schools, 148 Charter schools, and the three residential schools for students with hearing and visual impairments.

Hall, a 72-year-old native of Winton, was nominated earlier this year by Governor Roy Cooper for appointment to the State Board of Education. That nomination was confirmed earlier this month by overwhelming margins in both the NC House of Representatives and NC Senate.