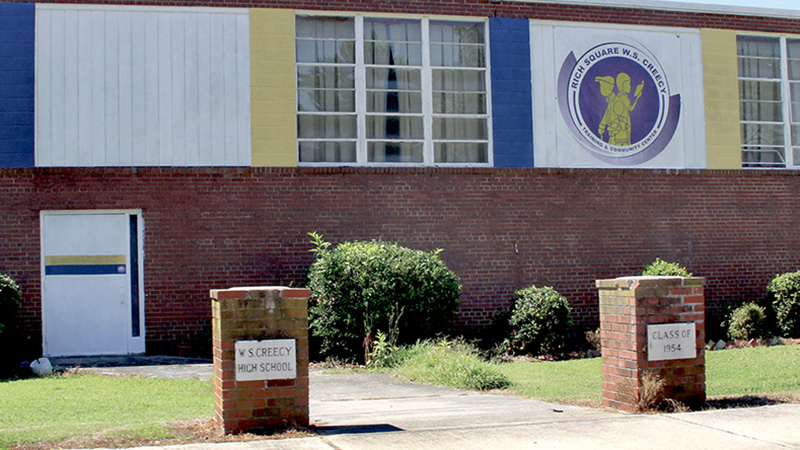 The historic W.S. Creecy School in Rich Square is now owned by Northampton County Local Government, with short-term plans to use the gym for recreational purposes. File Photo

GARYSBURG – The W.S. Creecy School in Rich Square has been closed since 2009, but plans are in place for it to come back to life for a different purpose.

During the Northampton Board of Commissioners meeting in Garysburg on Oct. 21, County Manager Charles Jackson presented a resolution from the Board of Education agreeing to turn the school over to the county. This followed an earlier resolution approved by the commissioners on Oct. 7 which stated their request.

Both resolutions stated the 15.54 acre property would be conveyed to the county for no monetary consideration with the intended use of developing the property for recreational purposes and community outreach. The Board of Education’s resolution, however, noted the county’s desire to specifically use the gymnasium building and the vacant lot on the north side of Roberts Road.

“We know that W.S. Creecy School has been there for years and no one is in the building,” explained Commissioner Board Chair Charles Tyner at Monday’s meeting. “There is a gym there that’s not old. A gym we could go in immediately and have those children out there with something to do besides walking the streets.”

Tyner said they requested the property from the Board of Education in order to develop recreational options in the town of Rich Square, which currently have none offered by the county.

“It won’t cost us a dime other than the little repair we’ve got to do inside of it. Our recreation department does have funds that it can use right now for that facility,” he continued, but added it would take more time to get the rest of the building ready for any other use.

Commissioner Geneva Faulkner said children in the area had been breaking into the gym to play basketball.

“They weren’t destroying a thing. Those kids just want something to do,” she said.

While the school itself has been closed for a decade, the Board of Education has previously allowed some groups to utilize the facility, such as the King’s Kitchen nonprofit as well as a church. But neither currently occupy the former school building anymore, according to Northampton County Schools Assistant Superintendent Kelvin Edwards.

County Manager Jackson told the News Herald there is no estimated time frame for when the county will begin hosting recreational activities at the gym. He also said they did not yet have an estimated cost for any work that may need to be done.

“Because we are in the beginning stages of assessing needed repairs, the county is not certain of the amount of resources needed to prepare the facility for use,” he explained.