Mr. Doughtie was born January 1, 1923 in Edgecombe County to the late Willie Lewis and Maude Clark Doughtie. He was raised in Murfreesboro by his beloved foster parents, the late Charlie T. and Minnie D. Miles.

Lacy Connell Doughtie, his loving wife of 60 years, preceded him in death June 7, 2007. 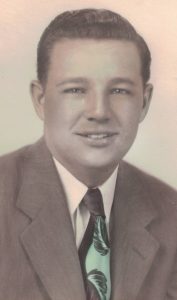 He was a member of Murfreesboro Baptist Church, was an avid reader, loved working in his garden, westerns, country music, woodworking and enjoyed a good joke.

He volunteered at Brady C. Jefcoat Museum for over ten years, assisting in moving items from Mr. Jefcoat’s home to the museum, building and arranging displays, and serving as docent.

A funeral service will be held at Murfreesboro Baptist Church on Monday, October 21st at 11:00 a.m. A graveside service will follow at Riverside Cemetery.

In lieu of flowers, memorial donations may be made to Murfreesboro Baptist Church, 200 West Main Street, Murfreesboro, NC 27855.

Online condolences may be shared with the family at www.bridgersfuneralhome.com.