GATESVILLE – While public health officials still busy themselves with a campaign to convince users of traditional tobacco products to kick the habit, battle lines are being drawn for a new fight.

Many veteran smokers are turning to vaping – the inhaling of a vapor created by an electronic cigarette (e-cigarette) or other device. While recent headlines have been filled with serious illnesses, even death, from using such devices – the cause of which is still under investigation – health officials have sounded the alarm, especially when it comes to a growing number of young people who admit to vaping. 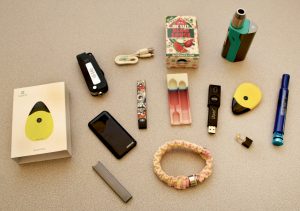 Here are a few of the e-cigarette/vaping items now popular among teenagers that were shown at last week’s informational seminar. Staff Photo by Cal Bryant

Her presentation began with a bombshell – the use of e-cigarette/vaping devices is up by 430 percent and 894 percent respectively for middle school and high school students across North Carolina (using the years 2011-to-2017 as reference points).

From a national standpoint during 2019, Beardsley said preliminary reports show that 35 percent of 12th graders and 16 percent of 8th graders admitted to vaping nicotine within the preceding year.

“We’re reaching epidemic levels with teen vaping as e-cigarettes and other similar devices are today the most commonly used tobacco products among our middle school and high school students nationally,” she stressed.

All of this, Beardsley said, comes on the heels of a successful campaign to cut down on teen usage of traditional tobacco products, which showed a decline from 31.6 percent in 1999 to just under 10 percent in 2015.

“That trend is now on the upswing with vaping products,” she noted.

Whether it’s traditional or new-age devices, studies have shown that 90 percent of tobacco users start before age 18.

“We’re working on the Tobacco 21 law; we feel if we can keep tobacco out of the hands of young people, the odds are better that after they pass their 18th birthday, and have yet to use tobacco products, they will not start,” Beardsley stated.

What’s even more concerning with vaping is what’s in that smoke, other than nicotine? Beardsley pointed to Acetaldehyde, Formaldehyde, Lead, Nickel, Cadmium, and Chromium as just a few examples.

“Those are some of the chemicals that have been identified in an e-cigarette. It’s the ones that are unidentified that raise the most concern. We don’t know what those chemicals are doing to our young people’s bodies,” she said. 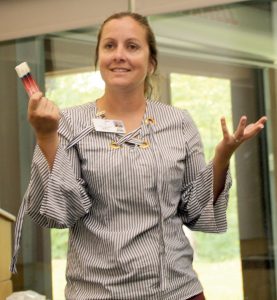 Additionally, she noted that as traditional tobacco use continues to decline and becomes less socially acceptable, the tobacco industry, “needs new products to attract replacement customers.” It’s here that Beardsley showed the evolvement of the e-cigarette market, which started with an electronic device that looks like a traditional cigarette.

“The designs of e-cigarettes keep changing, mid-size to large modified devices that can be customized, to what are popular devices manufactured by Juul and Sourin Drop,” she said. “The latter two are very popular among high school and middle school students because of their sleek design.

“What makes the Juul so popular among teens is that it looks more like a flash drive and can actually be plugged in to charge in a laptop computer,” Beardsley continued. “The product is so popular that Juul reached over a 50 percent share of the e-cigarette market last year.”

Beardsley said another selling point for Juul is its line of flavored pods (a liquid filled cartridge that contains nicotine salt, benzoic acid, propylene glycol, natural oils, and extracts). The market, she said, is flooded with over 15,000 unique flavors.

“Some e-cigarette manufacturers claim these flavors are safe because they meet the FDA definition of ‘Generally Recognized as Safe’ – or GRAS,” she observed. “However, GRAS does not apply to products that are not considered as food.

“The nicotine level in these devices is very high, and that’s scary,” Beardsley added. “If our teens are using them, then they are already addicted and that addiction will continue. Just one of these pods contains more nicotine than an entire pack of cigarettes.”

Another concern among health officials is the pods can be filled, “with just about anything,” Beardsley pointed out. She mentioned THC (in liquid form), the active ingredient in marijuana, and liquid codeine. The latter, she said, has led to teens suffering seizures.

Because there is a heating process within the e-device to produce the vapor (smoke), there is a concern of what effect that has on the chemicals in the e-juice.

“We’ve learned that several of these e-juice flavors are very harmful once they’re heated; the chemical components change when heated,” she said.

“Then we have cases documented where these e-devices have exploded, causing injuries,” Beardsley continued. “The kids want to believe these explosions are caused by bad batteries in these devices. My answer to that is does your TV remote explode when the battery is bad? Of course not. We believe the explosions in these e-cigarettes are linked to heating the e-juice, something is occurring to the chemical compounds when they are introduced to heat.”

In May, the State of North Carolina was the first in the nation to file a lawsuit against Juul, alleging the company was using marketing strategies that target youth. Another part of that legal action alleged the company is misleading the public about the associated risks of the product.

“Our children, and even some adults, believe these e-cigarettes are less harmful than traditional tobacco products. The truth is both contain nicotine, which is more addictive than heroin, cocaine, alcohol, caffeine, and marijuana,” Beardsley said.

As far as the FDA is concerned, Beardsley said they have the authority to regulate e-cigarettes and needs to do more along that line.

“In 2017, the FDA did ask e-cigarette manufacturers to lower the level of nicotine in their products and to limit the number of flavors being offered,” Beardsley noted. “Has that happened….no.”

However, the FDA has instituted a review process for e-cigarette manufacturers, but the application deadline for that review was originally set for August 2022.

“That allows these products to remain on the market the way they are now until 2022,” Beardsley observed. “But in July of this year we started hearing about all these cases of disease and death from the use of some of these products. The FDA did react by changing the application deadline to May of 2020. That’s a good thing, but please consider that the FDA has a year to study these applications. With that being said, it would be May of 2021 before they could devise regulations to take some of these products off the market.”

In August, the FDA did order four companies to stop selling their e-cigarette products.

“The FDA found 44 e-cigarette products that did not have authorization to be sold in the United States,” Beardsley said.

There are programs offered in schools to help teens kick the habit – Catch My Breath, and Inspire.

“We’re going into our local school systems, even during football games, to spread our message to students and parents,” Beardsley concluded.

Grimes gets time for crime