SUNBURY, NC – Robert Edward “Bobby” Spivey, 84, passed away on Thursday, October 17, 2019 in Sentara Heart Hospital, Norfolk, VA, where he was surrounded by his family.

Mr. Spivey was born in Gates County on June 10, 1935, and was the last surviving of five children born to the late Sidney Eugene and Margaret Simpson Spivey. Retired from Crossroads Fuel Service in Sunbury, he began working there years ago when it was Byrum Oil Company. He and his wife together had also owned and operated The County Market in the Eason’s Crossroads section of Gates County. A faithful member of Zion United Methodist Church where he had served in many capacities, he was also a member of the Watery Swamp Hunt Club, and had been a member of the Sunbury Volunteer Fire Department where he had served as Chief. An Army veteran, he served from January 1956 to January 1958. 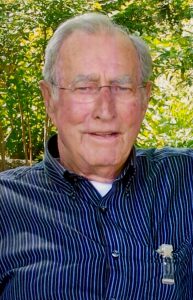 In addition to his parents, he was preceded in death on June 19, 2017 by his wife of 56 years, Jane Evans Spivey; his sisters, Eloise Lilley, Jean Spivey, and Kathleen Hinton; and by his brother, Sidney Spivey.

Surviving are his daughter, Deborah S. Creamer and husband, Mark, of Chesapeake, VA; and his son, Craig Spivey and wife, Tammy, of Wilmington, NC. He was known by most everyone as “Bobby”, but he was “Granddaddy” to Reid Hoffler, Sydney Spivey and Mitchell Spivey.

Bobby’s dry sense of humor, gentle spirit, and selflessness, combined with his love for others pervaded his life. He touched the lives of many, treating everyone with empathy and respect. He will be sorely missed.

Funeral services will be held Sunday, October 20 at 2:00 p.m. in Zion United Methodist Church and will be conducted by his pastor, The Rev. Steve Hall. The burial will follow in the church cemetery. Friends may join the family on Saturday, October 19, from 6:30 to 8:00 p.m. in Miller Funeral Home, 304 Main Street, Gatesville, in the church social hall immediately following the service, or all other times at the residence.