MURFREESBORO — Twelfth year head coach, Tim Place, is on indefinite administrative leave from leading the Chowan University football program. Associate Head Coach, Mark Hall, who has worked with Place for the last 12 seasons at Chowan and two seasons at Urbana University in Ohio, will step in to lead the team in his absence. 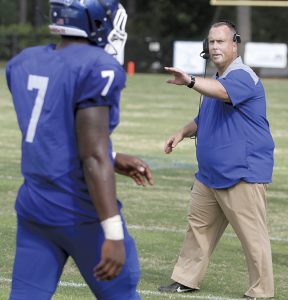 Chowan University football coach Tim Place has been placed on administrative leave according to the University. Officials say the move is unrelated to the team’s 1-5 record and the decision was strictly voluntary. File Photo

“What’s important to everyone is that Coach Place finds the time and space to evaluate the circumstances in which he is currently faced and come away with the best possible scenario for himself and his family,” said Patrick Mashuda, Vice President for Athletics.

“I will iterate that this decision was voluntary and not forced. Any statement contrary to that is speculation and holds no truth. We support Coach Place as an administration and as a University community and will continue to do so.”

“In the interim, Coach Hall has the experience and the trust of the current staff to lead the program in Place’s absence,” continued Mashuda.

The Hawks currently sit at 1-5 on the year and 0-3 in CIAA play. Chowan will travel to Virginia Union University today for a CIAA Northern Division game.