WOODHALL SPA, ENGLAND – On July 11, 2019, William Carey Harrell, Jr., husband of Gloria Campbell Harrell, passed away suddenly at the age of 73 at his home in Woodhall Spa, England.

Bill was born on May 16, 1946 in Farmville, N.C. to Marie Smith Harrell and the late William Carey Harrell. A year later the family moved to Gatesville, where Bill grew up and graduated in 1964 in Gates County High School’s second class, and later from Campbell University. He began his career in Raleigh with the North Carolina Department of Revenue and then relocated to the Philadelphia area where he worked as an internal auditor for Westinghouse and Blue Cross Blue Shield of Delaware. 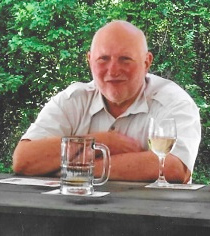 In the late seventies, Bill moved to Saudi Arabia where he was employed by ARAMCO. There he met Gloria, who was to become his wife for forty years. After moving to the UK, Bill was a founding partner in the firm of Cuffe Harrell and Associates Ltd., which provided accounting, auditing and consulting services for oil exploration projects in Europe, Africa, the Middle East, and Far East.

After retirement, Bill divided his time between the UK and his native Gates County. He renovated his grandparents’ 1892 home in Eure, where he held a number of memorable gatherings.

In addition to his wife and mother, Bill is survived by an aunt, Betty Jean Smith of Mebane, NC; three brothers, Henry Nelson Harrell(Linda) of Sumter, SC, Melvin Leslie Harrell (Debra) of Boone, and James Maddry Harrell (Kate) of Reidsville, seven nephews and a number of cousins.

A Celebration of Life for Bill will be held Saturday, November 2, 2019, beginning at two o’clock pm at the Umphlett/Harrell homeplace at 260 Barfield Road near Eure, where barbeque, etc. will be served. Dress will be casual.