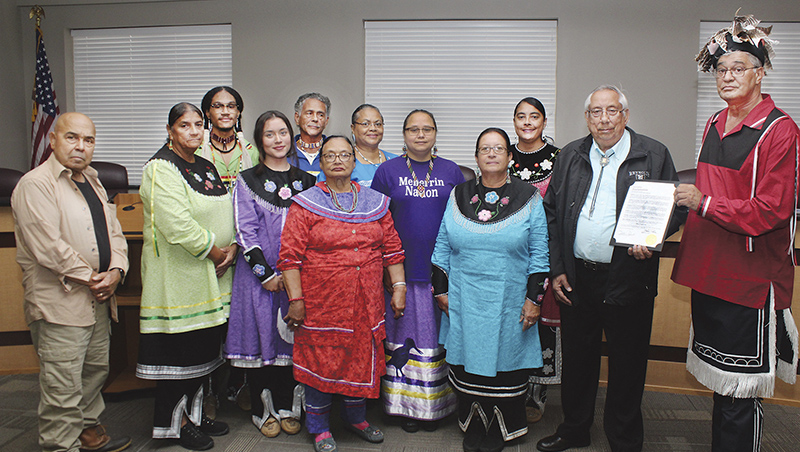 AHOSKIE – It honors the past and the present. And, in the only towns in the country with a Native American image seal on its official town logo, Ahoskie has now joined in the recognition.

October 14 was celebrated as Columbus Day, but it is also recognized as Indigenous Peoples’ Day, honoring the role Native Americans have played and continue to play in this country. 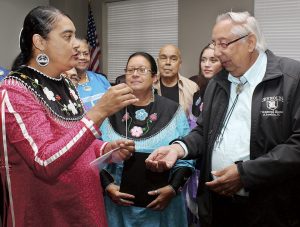 Tomika Brown (left) presents Mayor Pro-Tem Charles Reynolds with a gift of wampum, a form of Native American currency made from the shells of marine life. Reynolds is also of Meherrin descent. Staff Photo by Gene Motley

Before there was even contact with immigrant colonists, the Native American Meherrin tribe occupied the area of land between and adjacent to Virginia’s Nottoway and North Carolina’s Roanoke rivers. Today, their ancestors mostly live in Hertford County; and along with the Haliwa-Saponi (Halifax and Warren) and the Sappony (Person) are the descendants who are known in the northeastern part of the state.

Monday, with six members of the Meherrin Tribal Council present, along with others in Ahoskie, Mayor Jimmie Rowe signed a proclamation acknowledging the day in the town, reaffirming the commitment to promote the well-being and growth of the Indigenous community.

The Proclamation was presented to the tribal members by Mayor Pro-Tem Charles Reynolds, who also acknowledged his Meherrin ancestry.

“Recognition of this day gives honor to the first peoples,” said tribal member Margo Howard. “Columbus Day kind of contributes to the erasure of native peoples.”

“It promotes change within our community and brings awareness to the things that we have experienced,” said tribal Health Ambassador Justin Cowan. “It shows that we’re still here and that we are still growing as people and continuing to bring awareness to the general public of who we are, and what is our culture.”

As the tribe received the decree from the town, they gave a gift in return, a string of wampum beads – a Native American currency made of tiny white shell beads of marine life.

“We want this day to honor the history of native peoples and the 500 plus tribes and diverse cultures throughout what was once known as Turtle Island (continental United States).”

North Carolina has the largest American Indian population east of the Mississippi River and the eighth-largest Indian population in the United States. There are eight legally recognized tribes within the state.

“We (the Meherrins) were the first to go through the state recognition process,” said Howard.

The Meherrin’s earlier this month held their 31st annual Indian Nation Pow-Wow at the Tribal Grounds located on NC 11 between Ahoskie and Murfreesboro.