ELIZABETH CITY – For the first time in a decade, Hertford County has defeated Northeastern in Elizabeth City.

The win came Friday night when the Bears roared back from a 14-6 halftime deficit with 21 big points in the fourth quarter in a 33-21 victory in what was the Northeastern Coastal Conference opener for both teams.

Tye Saxby passed for 260 yards, going 12-for-25 and threw for three touchdowns. On the receiving end, two went to Avery Hoggard and another to Armand Vinson. Hoggard had 150 yards receiving on 5-of-8 catches, his longest for 80 yards. 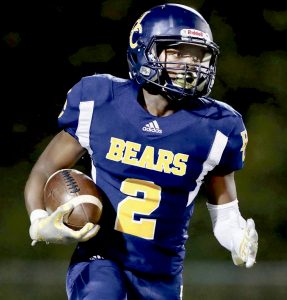 Defensively, Chris Vinson had a total of 12 tackles – twice as many as any other defender on his team – with 11 of those solo tackles. Vinson also had a sack. Jaylen Smith had six tackles, including two tackles-for-loss, and he forced one fumble. Kweli Sessoms had one interception, as the Bears registered two takeaways.

Hertford County trailed 14-0 as Northeastern scored on their first two possessions. The Eagles were driving for a third score when Smallwood picked off Northeastern QB Adrian Spellman at the Bears 20-yard line.

Saxby then hit Smallwood for the Bears’ first touchdown, their only score of the first half, but the two-point conversion failed, leaving them trailing 14-6 at the end of the first quarter.

Neither team scored in the second quarter leaving it 14-6, Eagles, at the mid-break.

Saxby was intercepted on the Bears’ first possession of the second half, and the Eagles marched 62 yards, capping it with a nine-yard scoring run by Juan Riddick that made it 21-6, Eagles, after the Caleb Brickhouse PAT kick.

Then the Bears’ offense woke up from hibernation.

Saxby hit Vinson for the Bears’ only score of the third quarter, but again the conversion run was stopped. It was 21-12 headed to the fourth.

Holley then ran it in for his first score, a three-yarder followed by Alden Lassiter’s PAT kick making it 21-19, Eagles.

After a three-and-out, the Bears drove 71 yards as Saxby hit Hoggard for the go-ahead score, 26-21, after Lassiter’s kick. Holley scored his final touchdown with less than five minutes to play, and the Bears sealed the win when Brian Eley recovered a fumble with four minutes remaining at the Northeastern 44. The Bears picked up a pair of first-downs before running out the clock.

Hertford County is now 6-1 after its fifth straight win and 1-0 in conference. Northeastern suffers its third straight loss to stand at 4-3 and 0-1 in league play.

The Bears are back on the road – at Kill Devil Hills – this Friday against First Flight.