PLEASANT HILL – Even though construction of the Atlantic Coast Pipeline (ACP) is currently on hold, officials gathered in Pleasant Hill on Friday, Oct. 11 to tour the new Northampton Regional Office.

“Here we are today to mark the occasion to open the doors,” welcomed Bruce McKay, Senior Energy Policy Director at Dominion Energy.

The Atlantic Coast Pipeline is a collaborative effort between Dominion Energy, Duke Energy, Piedmont Natural Gas, and Southern Company Gas. Dominion Energy, however, is the leading owner of the project and is responsible for constructing and operating the pipeline.

The ACP will originate in West Virginia to pump natural gas down through Virginia and North Carolina approximately 600 miles before ending in Robeson County near the South Carolina border. 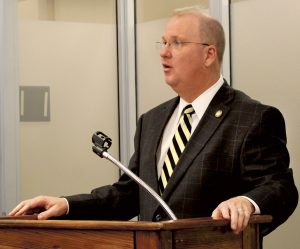 “Northampton County was the first county in North Carolina that approved the resolution of support,” McKay acknowledged, referencing that the county commissioners quickly supported the project when it was first announced a few years ago.

The project is expected to bring over $1 million annually in property tax revenue to Northampton County.

The newly constructed office is located in Pleasant Hill, right on the state border where the pipeline will enter into North Carolina, and is also the site of one of three compressor stations, but work on that aspect of the project has not yet begun.

“The (ACP) project is behind schedule a little bit,” McKay updated the attendees of Friday’s tour. “We have a ‘stop work’ underway on the project. We did that voluntarily when there were a couple permits that came into question.”

McKay explained a permit to cross the Appalachian Trail, which was issued by the US Forest Service, had been challenged by environmental groups, and they were currently waiting for the US Supreme Court to hear the case. The court’s decision is expected around mid-2020.

“During this time (that the project has been on hold), the need for this project has not gone away. If anything, it’s only gotten bigger,” he continued, explaining that the purpose of the pipeline is to bring more natural gas to underserved areas.

McKay said even though Dominion is focusing on developing renewable energy sources, natural gas is still needed in the meantime to fill power generation gaps.

“This is a great thing for Northampton County,” Wray said. “I have been supportive of this project from the get-go. It’s something we need for the future.”

Wray noted Dominion’s emphasis on supporting local businesses, mentioning companies in both counties that had been hired to help with different aspects of the pipeline construction process. He also mentioned various grants Dominion had given out to organizations throughout the county, and explained how the local community colleges could also benefit from training people in construction work.

Wray wrapped up his comments by saying he believed Dominion would be good stewards of the land in the wake of any environmental concerns.

Others who spoke at the event, such as Cathy Scott from the Halifax County Economic Development Commission and Paul Heaton of Roanoke Rapids-based Heaton Construction, focused on the different economic impacts for the project.

Easier access to natural gas, Scott said, would help draw more companies to the area. Heaton, whose company constructed the office building, recognized how the construction project gave jobs to not only his employees but over 50 subcontractors and suppliers as well.

To address some environmental concerns about the pipeline project, Dominion representative Steven McBrayer pointed out the office building was designed to be both energy efficient and environmentally friendly. Now that the building is complete, they plan to apply for LEED silver certification which will recognize those efforts.

“We recycled and used regional materials as much as possible,” McBrayer said.

The News Herald spoke to Dominion Energy’s communications representative, Ann Nallo, who said the number of jobs provided by both the office and the compressor station is estimated to be about 20.

“We absolutely remain committed to hiring locally for staffing the office,” Nallo said. “As for the timing, the office will become operational about the same time as the compressor station, so an exact date is yet to be determined.”

Northampton Commissioners Joyce Buffaloe and Kelvin Edwards were in attendance for the office tour on Friday, but both declined to comment on the project.