One caught, one sought in armed robbery

MURFREESBORO – One of two suspects in an armed robbery is in police custody, and an investigation is underway to catch the second person.

Murfreesboro Police arrested Kvon Lassiter, 25, of Murfreesboro on Thursday morning after he and another individual robbed 158 Sweeps, an Internet Sweepstakes Café located on West Main Street.

According to MPD Chief David Griffith, the call came in at 9:17 a.m. and officers responded immediately. Joining the MPD for assistance were officers from Ahoskie Police Department, Chowan University Police Department, and the Hertford County Sheriff’s Office. The officers set up a perimeter in the area nearby, and Lassiter was taken into custody approximately 10 minutes later. 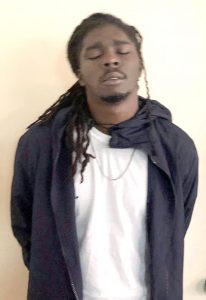 “He had a large amount of cash and a bag still on his person, as well as the weapon that was used in the robbery,” said Griffith.

Griffith told the News Herald Friday morning that the search for the second suspect is still underway, but they were “following up on some very good leads” based on surveillance footage and tips from the community. Anyone with information on the second suspect is encouraged to call the Murfreesboro Police Department at 252-398-4151 and can remain anonymous.

Lassiter, whose first court appearance was scheduled for Friday, Oct. 11, was held at the Hertford County Jail under a $300,000 secured bond. He is charged with robbery with a dangerous weapon, conspiracy to commit robbery with a dangerous weapon, second degree kidnapping, conspiracy to commit second degree kidnapping, assault with a deadly weapon, and possession with intent to sell/deliver marijuana.

Griffith said he wanted to thank all the surrounding law enforcement agencies for their quick assistance, noting in particular he was grateful the Hertford County Sheriff’s Office swiftly provided 10 deputies and their canine unit.

“I’m thankful we have such a great relationship with other agencies and I’m thankful for their support. It was a good team effort,” Griffith continued.

Griffith also wanted to express his thanks to people in the community nearby who helped point officers in the right direction during the pursuit of the suspects.