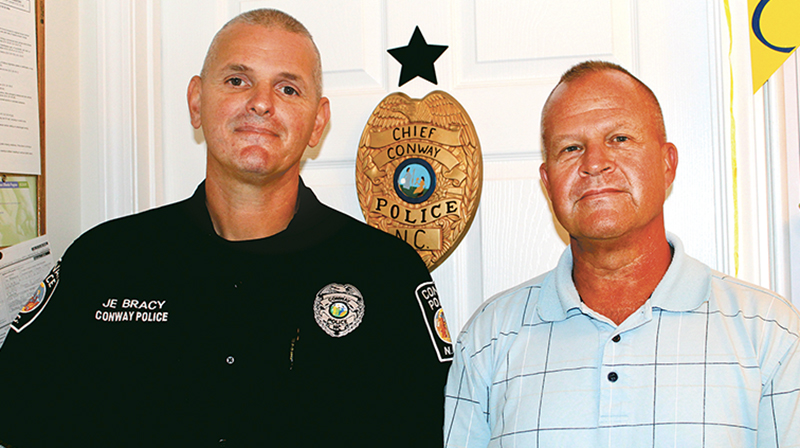 Jimmy Bracy (left) is the new Chief of Police in the Town of Conway, replacing his former boss, Billy Duke (right) who has retired after a near 20-year career with the town and 34 total years in law enforcement. Staff Photo by Holly Taylor

CONWAY – After three decades in law enforcement, Billy Duke decided to step down from his position as Conway Police Chief and give Jimmy Bracy the opportunity to step up.

Bracy was sworn in as Conway’s new police chief at their town council meeting on Oct. 1. While Bracy began his law enforcement career with the Northampton Sheriff’s Office and the Murfreesboro Police Department, he’s been an officer with Conway PD for the past seven years, first as a part-time officer before shifting to full-time work.

Duke, who has been with Conway PD since 1990 and also previously worked with Rich Square Police Department and the Northampton Sheriff’s Office, decided it was the right time to step away as the police chief after so many years at the helm. 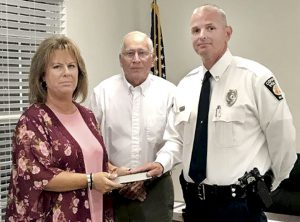 “I enjoyed the time that I worked with Conway. But I had my time in, and it was just at a good point where we had somebody that could step right into my place. I feel confident with Jimmy taking over,” Duke explained.

The long-time former chief, however, did agree to serve as a reserve part-time office in case a situation calls for extra help.

“Instead of me bossing him, he gets to boss me now,” Duke joked.

Bracy acknowledged the mentorship and wealth of advice he’s received from Duke over the years, and said he was glad it will continue.

“It’s good to have someone that I can fall back on, as knowledgeable as he is. He’s willing to help me when I need help,” Bracy explained.

Looking back at his career in his hometown of Conway, Duke said he’s seen law enforcement change so much over the years. He’s noticed a developing focus on community work, especially because of how connected everyone is in a small town.

“Everybody in this area knows everybody,” he said, “but you still have to do your job.”

“It feels good to work in a place where you know your community and your community knows you. To be able to give back to the community that you grew up in, it’s an honor,” Bracy chimed in. “We do the administrative work, but we’re actually answering the calls (too). We’re out talking with the people in the community a lot.”

Looking forward at the work ahead, Bracy said he plans to continue trying to make Conway a safe place to live. He is looking to hire another full-time police officer, and to also do more outreach to the children in the area.

“To do this job for 34 years is an accomplishment,” Bracy said, congratulating Duke for his long career in law enforcement.

He emphasized that they’ve both remained very devoted to their jobs as police officers.

“To do this job, you have to like what you do. You have to care about people, care about the community, want to make a difference, or want to help,” the new chief concluded.