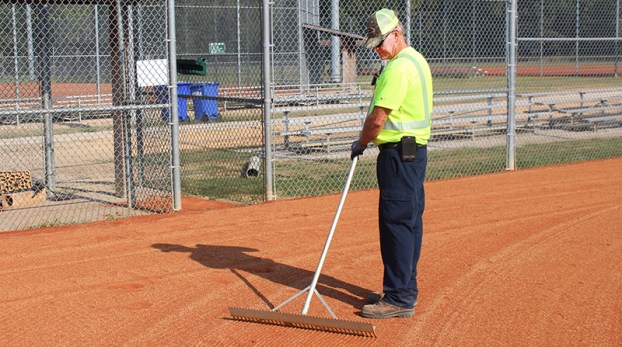 Town maintenance worker Joey Parker rakes one of the three ball fields at Ahoskie Creek Park that have received an upgrade thanks to a tourism grant. Twenty-five tons of new clay and sand have been applied to each field as part of the improvement. Staff Photo by Gene Motley

AHOSKIE – Some said it was like trying to slide on concrete; and that doesn’t even mention the high spots and the low spots before you got there.

That what became the adventure of running everything from the base paths to the grass outfield at the three baseball fields at Ahoskie Creek Park presented for players last summer. To say these ‘pastures of play’ were in need of some desperate upkeep was an understatement.

Since the fields are home from late spring to the start of summer for Ahoskie Youth League baseball and softball, complaints grew louder over the course of the two-month season from coaches and even the youngsters who had to play on these fields. Murmurs even grew louder from some of the game’s prime spectators: the parents and grandparents who line along the fences for the best seats in the ballpark.

With apologies all around, a ‘Field of Dreams’ they weren’t.

There was even a commentary written about their condition in this newspaper last May, asking town officials to ‘step up to the plate’ and work on making some necessary upgrades.

Since the town disbanded the Parks and Recreation Department, most of the care and upkeep of the facility fell on the Youth League leadership and members of the town’s Maintenance Department to do the dragging and raking.

Well, like a loud umpire’s strike call, the town heard the outcry.

With a price tag of roughly $105,000 needed to bring the ball fields up to standards, Town Manager Kerry McDuffie applied for a grant through the Tourism and Development Authority.

“These are monies raised from things like occupancy taxes from the places of lodging in Ahoskie, so it comes from community resources,” McDuffie said. “Towns are allowed to spend up to one-third of the monies on physical projects like upgrading ball fields.

In June, the town applied for a TDA grant of $75,000 and approval came a month later in July. Ahoskie then added another one-third of $35,000 from the town’s General Fund to meet the $105,000 total and next it was time to get the work underway.

“This is just a big part of our recreation revitalization,” said Town Councilman Matt Bradley. “We’ve re-done ‘Miracle on Main’, the town’s Gym, and other projects, so I think this is a great accomplishment from all of us. And, we’ve improved it without the personnel.”

For the ballpark improvement and upgrade, Maintenance Director Steve Lassiter and McDuffie then had to find someone to oversee such an undertaking, and they made a sound decision in the selection of Joey Parker.

Parker, who works at both the Ahoskie Police Department and at the town’s Wastewater Treatment facility, knew a thing or two about ballpark upkeep. Much of it coming from being a Tarheel League coach with the Cashie Youth Leagues in Bertie County, and most recently the varsity coach of the Ahoskie Christian School softball team.

“I’ve played ball since I was 15-16 years old, still playing,” Parker says with a grin. “When they contacted me, they knew I played, I coached, and I knew a lot about how these fields were supposed to be.”

“I used to come out here and spray all three fields for my girls, but before I could finish spraying the second field, the first field was so dry that it had dried out again, and so on every time I moved to the next field. It was just a constant battle keeping the fields soft enough for the kids to play on,” Parker explained.

“They came to me and asked me what was needed, so I got some people to get some quotes and see what angle and direction we needed to move in,” said Parker. “We had to figure what it was going to cost the town and how everything would play out, and fortunately, everything did play out.”

“The old stuff, the original dirt that was on here before, caused a lot of skinned knees and cuts,” Parker elaborated. “They’re going to want to slide now; before, they were scared.”

Thirty-six truckloads of the new bright red sandy clay were hauled in, a 70-30 mix out of Sumter, South Carolina, north of Lake Marion. Twenty-five tons worth was applied to each field.

“It’s a blended soil, called Sumter Sand,” Parker related. “This is the kind of materials that a lot of colleges use on their baseball and softball fields. It’s expensive, but it’s been a long time coming and its well worth the investment for the town.”

Spreading took about a day and a half on each field, working until late in the evening.

“This spread is two and a half inches higher than the original dirt, and when it rained all the water would stay on the field, restricting the flow with metal pipes lining the bottom of the fences, keeping it wet and mushy,” he explained.

The elevation allows drainage in all four directions framing the diamond, or all the way around the infield.

Those infield upgrades are just the first phase of work for the project. Next will come seeding the grass outfield.

“We’ve still got some work to do with the drainage, because (the fields) holds a lot of water,” Parker said. “We have to delay things until it dries out because the lawnmowers get stuck in the outfield and it holds us up until March or April. We then must fill in the low spots so the water won’t stand and pond.”

About one-half inch of sand will have to be applied to the grass, followed later by another half-inch.

“All this fall I’ll be steady adding sand on the grass so it can grow through,” Parker noted. “It’s late in the season before the grass would turn green. Everybody’s yard grass would be pretty and green by April, but this would still be brown and crispy. Once it grows in, it’ll stay pretty and green all the way up to cold weather.”

While personnel are limited, Parker does have a helper in Benny Pierce from the Maintenance Department.

Parker hopes the upgrades will also mean an uptick in participation, that more fall leagues and church leagues will want to return to the fields and play. They also want to see more participation from young people, even teens.

“We’ve got three nice fields that are just sitting here; they use it for two months, and the rest of the time it sits still,” he acknowledged. “We need to play all the way from March to November because with our mild climate it’s good ball-playing season. A good use for these fields will raise the town some money, have tournaments, and make the program grow.”

Despite the outfield grass delay, Parker says the field is ready for play now. 2020 will hopefully bring new bases and a new portable pitcher’s mound that will allow removal for a softball circle.

“I hope we can draw more people in from around the community, and even sharing fields with the schools, should their fields be un-playable,” he concluded. “When we get finished with all the landscaping, we’ll be ready to ‘play ball’.

“We all want to see the town do well, recreation, fire, police, and public works,” said Councilman Charles Reynolds, who toured the facility with fellow council members Bradley, Charles Freeman, and Rev. Roy Sharpe. “The community has been patient and understanding, and we’re taking a big step. We’re working; we’re getting there.”