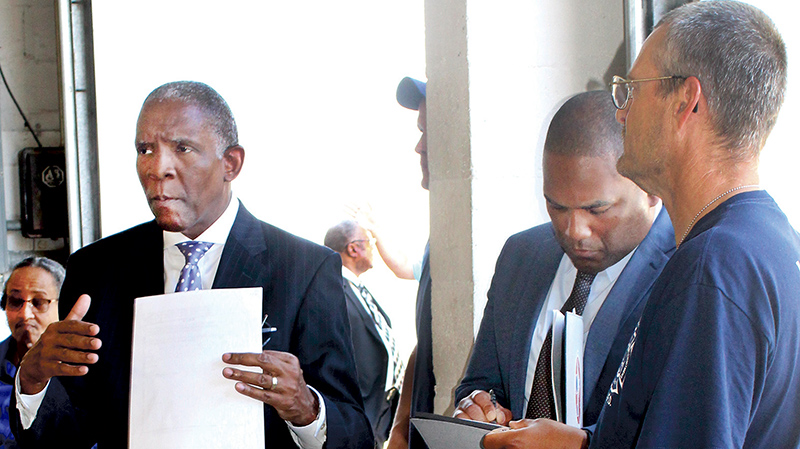 WOODLAND – When the Woodland Town Commissioners met with the Northampton County Commissioners in mid-September, there was a suggestion to reach out for help at the federal level in order to address some town issues. That congressional conversation began here Thursday, Oct. 3.

Reginald Speight, who serves as Regional Director for U.S. Congressman G.K. Butterfield, visited the Northampton County town to learn more about the needs of the community. The morning gathering, which also featured a tour of key locations, included discussion about the town’s fire department, the old Armory building, and the new Roanoke Chowan Community Health Center (RCCHC) office.

“This is an exciting day for Woodland,” said Mayor Kenneth Manuel, who coordinated the meeting. “We’re here to do what we can to make Woodland a better place to live, to work, to play.”

The condition of Woodland’s volunteer fire department building was a major point of conversation, with town members explaining they couldn’t afford loans, such as those offered by USDA, to build a new station.

“The existing building we have now was built in 1951,” explained Assistant Fire Chief Robbie Collier. “Our problem today is the existing concrete floors and foundation are sinking terribly. Back then trucks weren’t as heavy as they are now.”

“Every time it rains, we’ve got water coming in from all four sides,” he added.

During the tour of the building, Collier pointed out they had to fill in the crumbling concrete with gravel because the trucks were sometimes sinking into the mud while parked inside the building.

“We’re seeking any donations, any kinds of funds we can get,” Collier continued. “Any dollar we get will get us one step closer to making this (new station) come to fruition.”

Speight said he, as well as Rep. Butterfield, were very supportive of infrastructure improvements, and said that should also cover helping first responders like the Woodland Volunteer Fire Department. He also said he understood that having a small town population meant that any loans would be difficult to repay.

“The people who can benefit from (loans) can’t afford it. All we have done is create a system that doesn’t benefit those who need it,” he said.

Another stop on the tour included the old Armory building, which was transferred back to the town by the National Guard in early 2018.

Mayor Manuel explained that although they had hoped to use the spacious facility as a community center or a rental hall, lead contamination from a former indoor firing range has stalled those plans. Now the town was looking into the costs of decontamination and other renovations to determine the feasibility of keeping or selling the building.

The tour concluded with a quick look inside the new RCCHC office, which will be named in memory of Dr. John Stanley who passed away in early March this year. RCCHC CEO Kim Schwartz conducted the tour of the building which formerly housed Southern Bank, noting that a “soft” opening for the medical facility is planned for mid-November.

Speight, who was already familiar with RCCHC and their community work, said Rep. Butterfield was also a big supporter of Federally Qualified Health Centers like RCCHC, which serve all patients regardless of their ability to pay.

Other parts of the tour included brief looks at the playground equipment behind the Olney Apartments, the site of a new supply well, and the Woodland Memorial Walkway located outside the Town Hall.

Former town commissioner Ron Lane, the designer of the commemorative walkway, explained they wanted something visual for people to be able to visit.

“I wanted children to have an opportunity to reflect back on their past, their legacies,” Lane said.

Speight said he planned to return for many more meetings in Woodland in the future to continue learning more about the issues they face.