GATESVILLE – Red bowties, green ink, and the love of family and friends…it was a day with Thad Eure written all over it.

And now, those passing by the intersection of US 158 Bypass and Business on the western edge of Gatesville can plainly see a marker that briefly tells the story of Eure, a Gates County native who holds the record for the longest tenure as an elected official in the United States, serving as North Carolina Secretary of State from 1936 to 1989. He died at the age of 93 on July 21, 1993.

The Gates County Historical Society hosted the unveiling and dedication of a State Historic Highway Marker for Eure on Saturday, Sept. 28. Afterwards, those assembled at the unveiling were escorted by Gates County Sheriff Ray Campbell and the NC Highway Patrol, carrying the motorcade past Eure’s former homeplace (and family cemetery) en route to Jubilant Fields Equestrian Center, located near Gatesville, for a marker dedication ceremony. There, several descendants of Eure spoke of their famous relative. 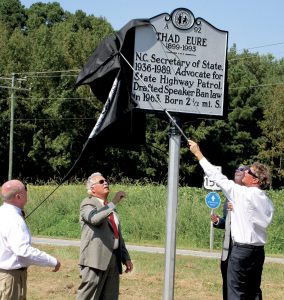 From left, Tazewell Eure Jr., Welsford Artz, Perry Black, and Rick Black unveil the Thad Eure State Historical Marker located at the intersection of US 158 Bypass and Business west of Gatesville. The four men are descendants of Thad Eure, a Gates County native who served as North Carolina Secretary of State from 1936 to 1989. Staff Photo by Cal Bryant

Donning a trademark red bowtie and straw hat, Robert Black told of how his grandfather obtained the title of the “oldest rat in the Democrat barn” – one bestowed upon Eure by U.S. District Court Judge John D. Larkins Jr.

“At first, granddaddy didn’t like it one bit, until he realized that the last three letters in the word Democrat were r-a-t. He loved it from then on and it stuck,” Black shared.

Black said his grandfather was born Nov. 15, 1899 – the son of Tazewell Augustus Eure – and grew up on a cotton and peanut farm in Gates County.

“He was reared with Eastern North Carolina tradition,” Black noted.

“It’s no wonder he always looked so dapper,” Black stressed.

After graduating, Black said Eure established a law practice in nearby Winton, serving as the Hertford County Attorney from 1923-1931 and Mayor of Winton from 1923-28. In 1929 he was elected to represent Hertford County in the North Carolina House of Representatives.

“While in Winton, he ran his campaign to become the North Carolina Secretary of State,” Black stated. “He was elected to that post in November of 1936 and held that office for 13 terms – 53 consecutive years. And can you imagine, he did that for all those years without a scandal.

“On his 93rd birthday, granddaddy said he glad he retired and thanked God that he was never voted out, kicked out, or carried out,” Black added with a laugh. “No matter how busy he was with the affairs of our great state, he always had time for family…..he loved his family.”

Over the years, Black estimated that his grandfather had signed his name over 625,000 times on state documents in his trademark green ink.

Black also pointed out that Eure was an advocate for the North Carolina Highway Patrol, aiding in that organization’s founding in 1929. Eure also drafted the Speaker Ban Law, which passed both chambers of the NC General Assembly in 1963 at the height of the Cold War. At the time, that legislation prohibited speeches on North Carolina public college campuses by known members of the Communist Party, persons known to advocate the overthrow of the constitutions of North Carolina or the United States, or individuals who had pleaded the Fifth Amendment in order to decline answering questions concerning communist subversion. 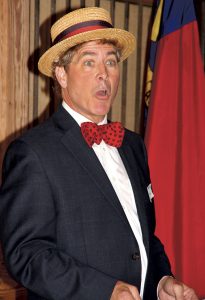 Rick Black, complete with a red bowtie and straw hat that were trademark apparel of his grandfather, shares a story about the life and legacy of Thad Eure. Staff Photo by Cal Bryant

“I feel that I have a lot of Thad Eure in me,” Black admitted. “In large part, I’m the man I am today because of him. I have so many great and lasting memories of him.

“It’s fitting that the historical marker we dedicate today is there for all travelers to see for the next century and beyond,” Black closed.

Doug Evans represented Eure’s granddaughter, Van Eure, at the ceremony, saying that she regretted not being able to attend due to another obligation.

“I’ve had such a great experience with the Eure family for decades,” said Evans, who worked at the famous Angus Barn steakhouse in Raleigh, founded in 1960 by Thad Eure Jr. and owned today by his daughter, Van Eure. “I remember visiting Thad Sr. at his office when he was our Secretary of State; his door was always open. He made time for everyone; he considered it the greatest thing in the world to have that job and represent the greatest people in the nation.”

Tazewell D. Eure Jr., the nephew of Thad Eure Sr., said he had looked forward to this special day for months.

“We stand in awe of what the Historical Society has done to honor my uncle,” he stated. “My uncle was always proud of his heritage, growing up here in the Hall Township. Even after he moved to Winton, and later to Raleigh, Gates County was still home.

“During the last 15 years of his career, I would accompany him to events all over our state, but his stories were always about Gates County,” Tazewell Eure continued. “I know in my heart that he is here today, enjoying every minute of this event.”

Brenda Hill Pollard served as Eure’s Executive Assistant from 1971 until he retired in 1989.

“Thad Eure was a true statesman and gentleman,” Pollard said. “I was impressed by his unique leadership, a style that he built by trusting his employees. In turn, they were loyal and faithful to him.

“He could relate to the old and the young,” she continued. “I watched him greet a countless number of schoolchildren (visiting the state capital on field trips). He always wanted to teach them about this great state.”

Of his trademark red bowtie, Pollard recalled Eure always saying, “I’m wearing one and washing one.”

She praised him for hiring her as his Executive Assistant at a time when that job among Council of State members was dominated by males.

“He made history when he hired me and that opened the door for others to follow,” Pollard noted. “Mr. Eure was a visionary. Of the five divisions he oversaw in state government, three were headed by women.

Gatesville Mayor Elton Winslow presided over the ceremony. He praised the efforts of Edith Seiling and the county’s Historical Society for not only helping to orchestrate the placement of the marker, but for their continuing efforts to establish the Thad Eure Museum, which will open inside the county’s 1836 Courthouse that is currently being restored. 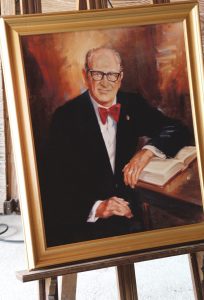 This portrait of the late Thad Eure sat near the podium at Jubilant Fields Equestrian Center where a ceremony was held Sept. 28 to dedicate the State Historical Marker. Staff Photo by Cal Bryant

Also offering remarks were Linda Hofler and Jack Owens, respectively the chair and vice chair of the Gates County Board of Commissioners.

“Mr. Eure was known for his love of North Carolina, his open door policy, and his red bowties,” Hofler remarked. “He loved Gates County; he never forgot his roots.”

“I never had the pleasure of meeting Thad Eure, but from what I’ve heard and read about him I could feel the love he had for this county and this state,” Owens said.

Rev. Wade Bennett, pastor of Eure Christian Church, offered the invocation where he gave thanks to Eure for his long legacy of public service.

Warren credited the support of Thad Eure Sr. and others with the founding of the NC Highway Patrol on July 1, 1929.

“Beginning in 1936 up until he retired in 1989, Mr. Eure would administer the oath of office to each member of every graduating class from the Highway Patrol Academy, and would sign each document in his trademark green ink,” Capt. Warren shared. “He would offer sound advice to each graduate. Even when he retired, he still had unwavering support for the Highway Patrol.”

“Thad Eure was one of us, he was like us here in Gates County,” Judge Willey remarked. “He grew up here and sprang from our roots to become one of the greatest public servants our state has ever known. He did it because he loved this county and loved this state.”

Godwin recalled his father, Phillip Sr., served in the State House of Representatives while Eure was Secretary of State.

“Thad Eure laid a good foundation for others from Gates County to follow in public service,” Godwin said. “I wouldn’t be where I’m at today without people like Thad Eure.”

As the crowd mingled around the marker prior to its unveiling, several shared stories about their interaction with Eure during his heyday. One was current Gates County Commissioner Ray Freeman.

“Back when I was a bodyguard for Governor (Bob) Scott, I would slip down the hall there at the old State Capitol Building and have a cup of morning coffee with Mr. Eure,” Freeman recalled. “We’d sit and tell stories about growing up in Gates County. Every so often when someone walked in the hallway by his office, Mr. Eure would say, ‘Ray, is that someone from Gates County? Bring them in here.’ That’s how much he loved Gates County.”

And on Saturday, Sept. 28, 2019, that county loved him right back….complete with red bowties, green ink, and a permanent roadside marker to forever remember his legacy.