With the regular season coming to a close next week, area high school girl’s tennis teams are looking to shore up their schedules with hopes of a high seeding for the upcoming post-season.

Bertie will begin their conference tennis tournament next week after finishing third in the Northeastern Coastal Conference regular-season race. First Flight took the league’s top spot after going unbeaten at 8-0. 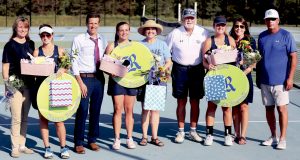 The Falcons closed out regular-season play with a pair of shutout wins after falling to Currituck in their league road finale. Monday, the senior-dominated squad of Lindsey Dickens, Alyssa Byrum, Amy White, Carley Dawson and Stephanie Castelloe, blanked Gates County 9-0, and then followed that with a similar score to top Hertford County one day later.

Among the independent schools, Ridgecroft School scored a huge win on Thursday as they edged Lawrence Academy, 5-4.

Otherwise, Lawrence continued to steamroll. The Lady Warriors won their 15th against just two losses as they topped Northeast Academy 7-2 in a home match, then blanked Greenfield School – also at home – 9-0. Young sophomore Annie Hayes Trowell and junior Lisa Kuschel set the pace, as both are undefeated this season. Perris Clayton, another sophomore, has yet to taste defeat on the asphalt as well.

Greenfield threw a scare into Northeast Academy before the Lady Eagles edged out the Lady Knights a win, 5-4. The top-three of Carly Stephenson, Jessie Martin, and Emalee Jones all won singles and teamed for doubles with Lizzie Smith on a pair of wins to put NEA over the top. Northeast will conclude their home matches next week at the Wellness Center Courts in Jackson hosting Oakwood and Ridgecroft.

Speaking of the Lady Rams, they concluded the unbeaten week for the area netters with shutout wins over Gates County and The Epiphany School. Belle Turner and Claire Place dropped just one set in sweeping their opponents in straight sets in a pair of matches. Ridgecroft raised its record above .500 with the wins to 6-4, but faced a powerful Lawrence squad on Thursday.

MURFREESBORO – In one of the wildest endings to a college football game, Shaw University coughed up a 27-point halftime... read more