RALEIGH – It’s official – J. Wendell Hall will become the first-ever Hertford County citizen to hold a seat on the North Carolina State Board of Education.

On Wednesday, both the North Carolina House of Representatives and the North Carolina Senate voted overwhelmingly to confirm Hall’s nomination. Also confirmed to seats on the State Board of Education were Dr. Donna A. Tipton-Rogers of Brasstown, the President and CEO of Tri-County Community College, and JB Buxton of Raleigh, the founding principal of the Education Innovations Group and has also worked as the deputy state superintendent of the North Carolina Department for Public Instruction.

Hall and Buxton will both serve as a Member At Large while Tipton-Rogers will represent the 8th District. All three were presented as nominees for confirmation by Gov. Roy Cooper. 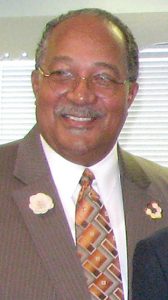 “I’m pleased to be confirmed by the North Carolina General Assembly to serve on this board,” stated Hall, currently in his 19th year on the Hertford County Board of Education and who has previously served as an Interim Superintendent for four school systems in northeastern North Carolina.

“It’s an honor to serve on this board and I’m looking forward to offering my help in guiding the educational opportunities of all the K-12 students across our great state. I’m thankful and grateful for this opportunity.”

Hall also has 10 years worth of classroom teaching experience at Red Oak Elementary School in Lawrenceville, VA and at R.L. Vann School in Ahoskie.

Prior to being elected to the Hertford County Board of Education in 2000, Hall served as Deputy Superintendent of Schools in his home county where he was twice named Interim Superintendent; and similarly led school systems in Northampton County, Weldon City, and Warren County.

“I’m so proud of J Wendell Hall, it’s about time that northeastern North Carolina has picked up a big seat at the table. That’s huge for us here in our part of the state, a step in the right direction. I’ve lobbied for him among my colleagues,” said NC House 5th District Representative Howard Hunter III. “He serves with distinction in our district and he’ll do the same for the state.”

“We are extremely excited to learn of the news that Mr. Wendell Hall has been confirmed to serve on the North Carolina State Board of Education by the NC House of Representatives and the NC Senate,” stated Hertford County Schools Superintendent Dr. William T. Wright, Jr.

“Mr. Hall has dedicated over 50 years of service to the children of North Carolina,” Dr. Wright continued. “We understand here in Hertford County that Mr. Hall represents what’s right for students and staff and he has always been a strong voice for his belief to make things better. I am also very excited to know that we now have someone who will work tirelessly to make sure that our perspective is considered in the northeastern part of the state who lives among us. Mr. Hall’s experience serving and working with school districts in several of our northeastern counties makes him the perfect representative for us in Raleigh on the State Board of Education. Now, the whole state of North Carolina gets to benefit from his perspective. I stand at the front of the line to congratulate Mr. Hall and look forward to his continued advocacy and success.”

Hall said he is awaiting notification from the Governor’s office on when his eight-year term on the State Board will begin. That swearing-in could come as early as the next scheduled meeting of the board, slated for Nov. 5-7 in Raleigh. He will remain as an elected member of the Hertford County Board of Education.