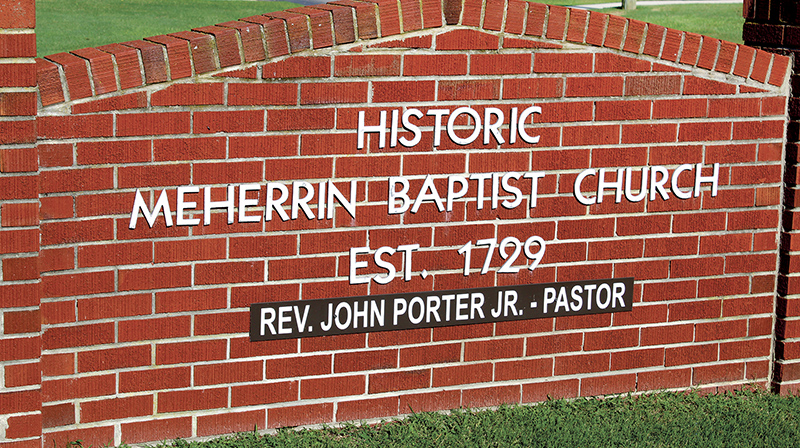 The brick marquee in front of Meherrin Baptist Church denotes the year of its founding. Staff Photo by Holly Taylor

MURFREESBORO – Not much in America is old enough to celebrate almost three centuries of history. Technically, not even the country itself, which marked its 243rd birthday back on July 4 this year.

But Meherrin Baptist Church is a rare example of something with a long-lasting legacy. The church, located at the end of Meherrin Lane in Murfreesboro, will celebrate its 290th anniversary on Sunday, Oct. 6.

“Meherrin is considered to be the mother church to a great number of other churches in our region, and we thank the Lord for this wonderful heritage,” said the church’s current pastor John Porter Jr.

“It is truly an honor to pastor a church with such a rich history of training disciples in the Gospel and ministering to a community that spans far beyond the town of Murfreesboro,” he continued.

According to a history of the church, written by one of its former pastors, Rev. J. M. Duncan, the church began as a meeting place in 1729 by Joseph and William Parker when they moved to the area. By 1735, the community had joined together to erect the first building out of wooden logs. It was only 20 by 25 feet in size. 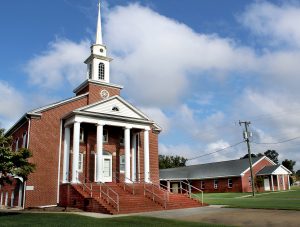 Meherrin Baptist Church in Murfreesboro will hold its 290th anniversary celebration during an extended worship service at 10:30 a.m. on Sunday, Oct. 6. Staff Photo by Holly Taylor

The church continued to thrive, and in 1790 it was noted for being the only Baptist church in Hertford County at the time. Worshippers from as far away as Northampton, Bertie, and Gates counties often traveled to attend services.

Like any other house of worship, Meherrin saw bad times and good times. In 1799, membership was as low as only 16 members. But following a religious revival in the region, about 160 people were added to the church by baptism only three years later. The history records show this kind of fluctuation between revival and indifference and revival again happened several times over the years.

Two centuries after the church was first founded, they showed a membership of 420 people.

Over the years, the church constructed new buildings to accommodate the growing number of worshippers, and expanded its grounds to include a cemetery and a parsonage. In 1900, the church building caught fire and sustained a lot of damage, but was repaired by church members for a total cost of $61. In 1914, a new building was constructed and paid for in the span of one year. That was the sixth time the church had been rebuilt.

The building which currently houses Meherrin’s worshippers today was completed in 1953, though many changes have been made since then to upgrade the brick structure.

Meherrin Baptist Church’s legacy, however, is rooted in being the “mother church” for a large number of other churches in the surrounding area.

According to the church history, a branch of the church based in Ahoskie asked to separate as its own independent church in 1804. In 1806, the Middle Swamp branch in Gates County also set off as their own church, which in turn, spawned several other churches in the county. In 1835, Buckhorn Chapel became an independent church, and was followed by the Church of Mt. Tabor in Winton in 1839.

Porter, who has pastored the church since 2017, said he is glad to see the church continue to thrive and grow even in the short time he’s been at the helm.

“I often pray, and say to our church family, that the greatest days of Meherrin Baptist Church are in front of us, not behind us,” he said. “I have baptized those from age 8 to age 83 and all ages in between, and I believe there are many more to come.”

“In addition, I believe our future is bright because we are renewing our commitment in ministering to our local community and doing so on a larger scale than before,” the pastor continued.

Porter also said the church is committed to continuing its mission to spread God’s word and to send help to those who need it.

As for the upcoming 290th anniversary celebration, Porter said, “I am humbled as I reflect on what this church has been through and accomplished. I am humbled to see the Lord’s work continuing to be done here. And I am humbled to think about the future as we seek and fulfill His will and be His Lighthouse for those who are living in the darkness.”

The anniversary celebration will be held as an extended worship service at 10:30 a.m. on Sunday, Oct. 6. The guest speaker will be Milton Hollifield, Executive Director-Treasurer of the NC Baptist State Convention.