WINDSOR – Annie Wilson tells a story of an elderly lady now living in Bertie County, wished to locate her birth certificate, though she was born out of state.

“She wasn’t familiar with the computer, so we went online for her, printed an application, helped her fill it out, signed it, so all she had to do was put it in the mail with a money order, and wait a few weeks to receive it,” Wilson recalls

It took nearly a half-day’s effort, but Wilson, who is the Bertie County Register of Deeds, undertook a successful search and was able to put the woman on a path to tracking down the necessary documentation. 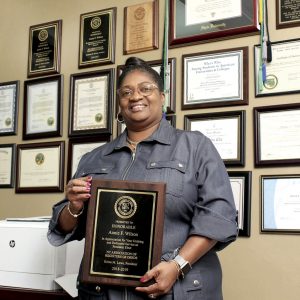 Bertie County Register of Deeds, the Hon. Annie Wilson, is photographed in her Windsor office with her certificates and commendations. Wilson was recently elected as president of the North Carolina Association of Register of Deeds, a statewide post. Staff Photo by Gene Motley

“That’s what I love about what I do, the satisfaction of knowing that I have helped the citizen,” Wilson says with a wide smile. “When people come in and don’t understand what they need, it’s our job to explain it to them and help them get what they need.”

As one of 100 such registrars in North Carolina, Wilson and her 99 counterparts are custodians of records. The office normally maintains public records, primarily with regard to real estate ownership. But they also assist with keeping records and indexes of birth, death, and marriage certificates, notary oaths, amendments, and other legitimations, such as military discharges.

Elected to two, four-year terms in the position, the Lewiston native this past summer was installed as President of the NC Association of Registers of Deeds (NCARD). That’s a pretty good climb to the head of the state association for someone only serving in the county’s top post for seven years.

“Now, I have worked in the Register’s office since 1999, and in 2012 when Belinda White retired, I ran (for Register) and won,” she recounts. “Afterward, I was eager to learn what the Association was all about.”

In tracking Wilson’s rise, in 2013 she was elected as one of the Legislative Representatives for District-8, which is comprised of the 13 counties she calls “from Hertford to Hyde”.

“In 2014 I first served on the Executive Committee, working up (each year) from Historian, to Secretary, to Treasurer, then 2nd Vice President, then President-Elect last year,” she said. “Six years in all.”

“Since I took over in 2012, my platform has been to keep up with the technology of the 21st century,” Wilson declares. “I feel like I’ve done so, and now Bertie has – among other things – online birth certificates.”

Under the new system, any person born in Bertie County, no matter where they now live in the United States, can log onto the Register’s office’s website and request their birth certificate and a copy of it comes from the place of origin directly to the local Register’s office in Windsor.

Bertie County also now has electronic recording, whereby documents can be submitted electronically. One of the largest is the EBRS, or Electronic Birth Registration System.

“It’s a statewide system set up through the Office of Vital Records; and since Bertie County does not have a birthing center – we haven’t had a birth certificate filed in the county since the early 80’s – anybody born in another county anywhere in the state since 1971, they can come into this office and get their birth certificate, just like in Raleigh. It’s electronically sent to this office from the capital and for a fee, which they can even pay for with a credit card, they can just stop in and pick it up instead of making a drive to say, Greenville.”

However, she cautions that you have to be on the system to do it. Those born before 1971 would have to go to the county where they were born.”

“He inspires me to work harder, to do more and to lead by example,” she noted.

Her son was among those who attended her swearing-in to the state post back in August. They also included Dr. Luther Cherry, Bertie County native, and a former Wake County Schools superintendent now the pastor of Evening Light Church on NC 305 in Windsor.

“He has been very much an inspiration to be,” she said.

The discrepancy between the old ways and the new ways in Register of Deeds offices across various county lines are what Wilson hopes to shore up during her year as NCARD president.

“I’m looking forward to getting to know the Registers more and seeing how each different office operates,” she related. “My goal is to visit all 100 counties, see their offices and help them create new, updated vital records.

Wilson hopes this ‘tour’ will also bring back some new ideas for Bertie County.

“For all the Registers, they can serve with Vital Records all on the same level,” she outlined. “It’s like creating a manual to help new Registers beyond the General Statutes, how to keep and retain staff, and get with the new technology.”

“Of the 13, we have four who are, and nine who aren’t,” she acknowledged. “I hope to get them all in this district.”

“That and to continue to serve Bertie County as best I can,” she concluded.”