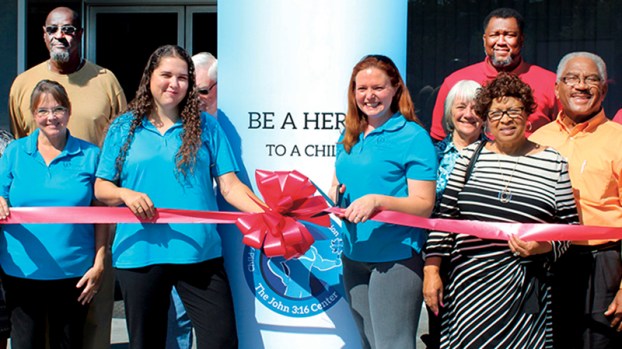 RICH SQUARE – A nonprofit working to help families has recently expanded its service in Northampton County.

The John 3:16 Center celebrated the opening of their Northampton County office with a ribbon-cutting ceremony on Tuesday, Sept. 24 at The Roanoke Center in Rich Square.

“We are really pleased with having them here in Northampton County, and I know it’s going to be a huge success,” welcomed Judy Collier, Director of the Northampton Chamber of Commerce, who sponsored the event.

Shannon McAllister, who serves as Executive Director, said the nonprofit was founded in 1998 and has continued to grow since then.

“Our mission is breaking cycles of generational poverty and preventing child abuse and neglect,” she said, summing up what they try to do for the community.

The organization is based in Littleton with two offices, spread between Halifax and Warren counties. They serve families in Northampton County too, but realized their location wasn’t ideal.

“One of the things our Board did at the end of last year was review what we’ve done and where we’ve been. Of the three counties we serve, Northampton was the one that we were able to serve the least because of transportation problems,” McAllister explained.

Before opening the new office, the Center held “listening sessions” in Jackson and Woodland in order to learn more about the needs of Northampton citizens. McAllister said they got a lot of good information about the groups already working within the county.

“We didn’t necessarily want to bring in something that already exists. We felt like it would be better to try to connect and strengthen and bring more resources to the things that are here and built by the members of the communities,” she continued. “They know best what their communities need.”

She said she hoped they would be able to build many partnerships and collaborations with existing groups in order to bring more resources to everyone.

The Center’s Operations Director, Brittany Sinka, said they’ve already started some projects in Northampton County, such as donating school supplies to Conway Middle and Gaston Middle School. They’re also gearing up to start their Christmas outreach program soon, and Sinka noted they would like to connect with other organizations for that.

Several people in attendance for the ribbon-cutting event expressed their appreciation for the Center expanding its outreach further into Northampton County.

“We need to take the example that Jesus set and care about each other,” said Godwin. “We’re just so glad that you’re here. Thank you for choosing us.”

Northampton County Commissioner Joyce Buffaloe also welcomed the Center to the county, recalling that she often collaborated with the organization when she worked with the Garysburg Family Resource Center in the past.

Sondra Dickenson, who serves as the director for the Roanoke Center, said hosting the John 3:16 Center was a great opportunity that would benefit everyone.

“Hopefully, with John 3:16 (Center) here, we’re going to be able to open it up to other people in the community and let them know we’re here to help them. Working together is the key to anything being successful,” Dickenson said.

Currently, the new John 3:16 Center office is operating by appointment only. People interested in setting up an appointment can call or text 252-370-4482.

For more information about the organization, visit their website www.john316center.org

JACKSON – The North Carolina Department of Public Safety (NCDPS) announced through a press release on Sept. 24 that Odom... read more