CULVER CITY, CA – It didn’t take long for an Ahoskie native to make a name for herself on “The Voice.”

Opening its 17th season Monday night on NBC, Brennan Lassiter was among the early contestants in the blind audition round chosen to advance on the popular TV show. Lassiter delivered a powerful rendition of “You Are My Sunshine” and turned all four chairs of the judges – Kelly Clarkson, Gwen Stefani, John Legend, and Blake Shelton.

“I didn’t have to grow up in country music to hear the beauty and the power in your voice,” said Legend after Lassiter’s performance.

“She’s fantastic. I really want you to pick me,” Clarkson shouted.

After weighing her options, Lassiter chose Clarkson as her coach. 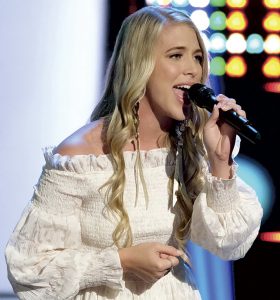 Ahoskie native Brennan Lassiter had a four-chair turn and advanced during Monday night’s season premier of “The Voice.” Photo courtesy of NBC.com

“I’ve never (performed) music outside my church; this is my very first sing ever,” Lassiter stated just prior to making her selection.

Back on her native soil, Brennan’s grandfather, Mike Lassiter, joined his wife, Shirley, inside their home in the Millennium community as they proudly watched their “Princess” perform.

“That’s what I’ve always called her – my Princess – and yes, I did cry when I heard her sing on national TV Monday night,” Mike Lassiter said.

He shared that Brennan, age 20, is the oldest child of his son, Kraig Lassiter.

“She lives with her mom, Jamie, and her maternal grandparents, Johnny and Jan Baker, near Easley, SC,” Mike Lassiter said. “Johnny Baker once served as the pastor at Union Baptist Church before moving to South Carolina. He and his wife are great people. I know that Brennan has been raised in a good Christian home and has been bought up in church where she developed a talent for singing gospel music.

“We go there and visit with them and they come back home here to visit with us, Kraig and Amber, and other family members and friends,” Lassiter added.

Lassiter stressed that he noted his granddaughter’s talent at a very early age.

“She was good at anything she set her mind to, especially singing,” he remarked. “Her mother is a good singer, and I sang for nearly 30 years with some gospel quartets and still perform as a soloist for revivals and funerals. But the talent that Brennan possesses is all natural.”

It was in March of this year that Mike and Shirley Lassiter learned of their granddaughter’s plans to audition for a spot on The Voice.

“We went down to celebrate her 20th birthday and that’s when she told us of her plans,” Lassiter noted. “I know what she’s capable of. I don’t know how far she’ll get, but no matter what happens she will come out on top in the end.

“Brennan is exactly what you see on TV….no bells, no whistles; she’s very grounded in her life. It’s no big surprise to me that she’s made it this far. I can’t wait to see what God has in store for her next,” Lassiter concluded.

To see a replay of Brennan’s performance on The Voice, search her by name on You Tube.

The Voice airs every Monday and Tuesday at 8 p.m.

WOODLAND – Three parcels of land on Lake Gaston were the subject of a public hearing held here during the... read more