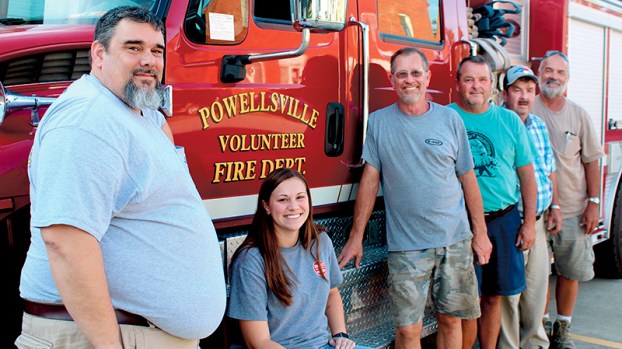 Passing along the savings

POWELLSVILLE – The town, its Fire Department, and more importantly – its homeowners – received some great news from the Office of the State Fire Marshall (OSFM) last month when the town’s fire insurance classification was reduced in protection class from a Class 6/9E to a Class 5/9E.

“It means the houses and businesses in our area will have a lower insurance premium per year because of this drop between the six and the five,” said Powellsville Volunteer Fire Department Chief David Powell.

OSFM concluded its review of the fire suppression features being provided for the Powellsville Fire Department resulting in the community classification reduction back in the late Spring of this year.

All the state’s fire departments are inspected on a periodic basis for insurance classification to ensure compliance with criteria established by the NC Department of Insurance. This dictates a minimum level of fire protection and qualifies homeowners throughout the state for eligibility to receive reduced insurance premium rates.

“The Inspection Section also has the responsibility to conduct surveys of all fire districts throughout the state with an insurance classification lower than the 9S classification,” said State Fire Marshall Mike Causey.

Rates on dwellings (including those insured under homeowners’ policies) are established by the North Carolina Rate Bureau. They will be informed of the change for Powellsville and the new rate will be effective beginning Sunday, Dec.1, 2019.

Causey went on to explain the classification: If the classification is a split class, the first class (e.g., “5” in a 5/9S) applies to properties with a fire flow of 3500 gallons-per-minute (gpm) or less within five road miles of a recognized fire station and within 1,000 feet of a fire hydrant or alternate water supply.

The second class (9S) applies to properties beyond 1,000 feet of a fire hydrant but within five road miles – but no more than six miles – of a recognized fire station.

The private and public protection at properties with larger needed flows is individually evaluated, and may vary from the 5/9E classification.

“We have a six mile insurance district,” Powell added. “We (Powellsville VFD) also have a large response area that stretched beyond Powellsville’s five-mile limit, which is between here and Aulander. That area has a higher rating, and the Department of Insurance doesn’t recognize a lower rating for that area because of the distance from our fire department and houses in that area.”

Powell received the re-classification notice from Causey at the end of August. A similar letter also went to Bertie County Emergency Services Director Mitch Cooper. It contained congratulations on the improvement of the fire suppression rating.

Because some of the fire district area is also covered by Hertford County, a similar notification was also sent to Hertford County Emergency Management Director and Fire Marshall Chris Smith.

“We’re bordered close to Hertford County because we go all the way to the Piney Wood Chapel area (US 13 South), north to Bethlehem Church, Ward Road, and the John Moore Road,” Powell emphasized. “There are no fire hydrants in those areas, so we have to help the people in those areas. They’re going from a 9 down to a 5, and that’s big business.”

Ten percent of a community’s overall score is based on how well the communications center receives and dispatches fire alarms.

The evaluation of the Powellsville FD looked at and awarded credits for: communications facilities provided for the general public to report structure fires; Enhanced 9-1-1 telephone service including wireless; Computer-aided dispatch (CAD) facilities; alarm receipt and processing at the communication center; training and certification of telecommunicators; and facilities used to dispatch fire department companies to reported structure fires.

For emergency reporting, Powellsville received a 2.40 out of a possible 3 (in credits); for Telecommunications, 2.39 out of 4; and, for Dispatch Circuits, 1.50 out of 3. That equaled a total Emergency Communications credit of 6.29 out of 10.

The town’s full Emergency Reporting total was 80 out of a possible 100.

OSFM inspection also noted that 50 percent of a community’s overall score is based upon the fire department’s structure fire suppression system.

Powellsville received 24.56 out of a possible 50. The lowest scores being credit for company personnel, which reviews the average number of existing firefighters and company officers available to respond to reported first alarm structure fires in the city (6.40 out of 15); and credit for training (1.53 out of 9).

Another 40 percent of a community’s overall score is based on the adequacy of the water supply system.

The town has nine fire hydrants: three operated on the Powellsville Water System (two on Sally Freeman Road, and another at Railroad and Commerce Streets; the other six are with the Bertie County Water Department (Center Grove Road, Cremo Road/US 13 South, two more along US 13, Ward Road, and at Hexlena Road/Sheriff Garrett Road).

The OSFM field representative evaluated the capability of the water distribution system and credits if the department met Needed Fire Flows (NFF) up to 3,500 gpm; the size, type and installation of fire hydrants; and, the inspection and flow testing of hydrants. Powellsville was 18.82 out of a possible 40.

These accounted for the reduction to the 5/9E.

“This means we’re doing the right thing,” Powell noted. “Not just what these fire trucks are doing, that’s great; it means the firemen – all volunteers – have the training and participation. It also means we’re thanking the people in our fire district that made the donations and contributions in the best way that we could help them.”

CULVER CITY, CA – It didn’t take long for an Ahoskie native to make a name for herself on “The... read more