MURFREESBORO – In one of the wildest endings to a college football game, Shaw University coughed up a 27-point halftime lead as Chowan University fought back to take command, only to suffer a crushing 48-47 double-overtime loss to the Bears at Garrison Stadium here Saturday night in the CIAA opener for both schools.

The loss left Chowan 1-2 on the season, same record for the Bears.

The Hawks defense held strong despite the score in the first half, recording nearly 21 minutes on the field.  Connor O’Brien led the team with 15 tackles.  Rafiq Abdul-Wahid had nine tackles, two tackles for loss, a half sack and a blocked field goal.

“We made some halftime adjustments,” said an exhausted O’Brien after the game. “We played the way we’re supposed to play there in the second half.”

On the offensive side, Bryce Witt threw for four touchdowns but was picked off three times.  Deshaun Wethington posted his second straight 100-plus rushing game with 106 yards and a score, while Sam Dunn led the receivers with 78 yards and a touchdown.  Brian Hopper, Jr. and Torrance Brumfield add a receiving touchdown. 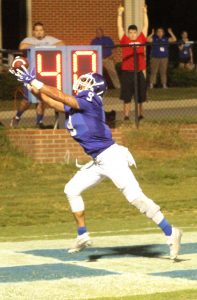 Chowan University receiver Dominic Floyd stretches for what would have been a game-winning catch in Saturday’s wild double-overtime game between the Hawks and Shaw University. The Bears escaped Garrison Stadium with a 48-47 win in two overtimes. Staff Photo by Cal Bryant

Dominic Floyd threw a 43 yard touchdown pass to go along with six receptions for 40 yards and two touchdowns; but he was obviously crushed following his noble effort when the game-winner bounced off his fingertips in a failed two-point conversion for the win in the second overtime.

“We had to go for the win at home,” said head coach Tim Place. “You don’t play for a tie.”

“These games are won Monday-thru-Friday,” he added. “Our young men competed to the very end. They didn’t quit, it just didn’t happen in our favor.”

The Bears came out hot, scoring on all five of their first half possessions, while Chowan had two Witt picks, a turnover on downs, and a punt, leaving them staring at zero points after the first 30 minutes, while Shaw seemed in command with that 27-0 lead.

“We started slow, but Coach challenged us at halftime,” said Witt post-game. “He made us see what we are capable of, giving us a chance in the second half.”

Out of the locker room, Chowan looked like a different team as Witt connected early with Floyd to spark the offense, and Brumfield went seven yards untouched into the left corner of the end zone to cut the deficit to 27-7.

After the kick-off, Chowan’s defense forced the first turnover of the contest as Marcus Devin scooped up a Bear fumble and returned it 39 yards for a touchdown.

Shaw struck two series later with a touchdown run, but Arthur Radford blocked the PAT to keep the score 33-14.

The Hawks’ offense flourished on the next two drives as Chowan scored off the double pass: Witt to Floyd to a wide-open Samuel Dunn for a 43 yard touchdown.

Then on a ‘circus play’ on the next series, Witt escaped several potential sacks and found Floyd as the Bears closed in around him for a touchdown to trim the deficit to 33-28.

The Chowan defense continued to give the Hawks opportunities thanks to another pick.

Witt would connect with Floyd again for the go-ahead touchdown, 34-33, but the snap on the PAT was muffed.

Defense proved to be the driving force again with another stop. The snap on the punt would go over the punter’s head which he recovered at the Shaw 11.  Two runs by Wethington and the Hawks would have a 41-33 lead with 6:49 to play.

But a poor punt later in the shadow of Chowan’s own goal, gave Shaw prime field position and the Bears would convert on fourth down for a touchdown with 47.9 seconds left, and the close two-point conversion would knot the contest at 41-all, later sending the contest to overtime.

Neither team scored in the first OT as Chowan went for it but was stopped short.

The Hawks defense would hold strong once again, blocking the 48 yard Shaw field goal attempt to force a second overtime.

On the first play of the next OT, Shaw scored and converted the PAT to lead 48-41.

On their possession, Hooper would leap high to haul in a pass from Witt for a Chowan touchdown.

The Hawks went for the win in front of the home crowd as Witt rolled to his left and found Floyd in the left corner of the end zone, but he couldn’t squeeze it in his fingertips and both player and ball bounced to the ground.

“Coach knew what we were capable of, and our leaders spoke up tonight,” said lineman Donald Boone. “But it was the little things that cost us.”

This Saturday, Chowan makes their longest trip in program history to Lebanon, IL, as the Hawks will meet McKendree University (0-3) for a non-conference game. Kick-off is slated for 2 p.m. EDT.

Pay-to-play? The rich get richer

If the State of New York approves a measure that would require the athletic departments at its colleges/universities to share... read more