While powerful Lawrence Academy steamrolls through the rest of the NC Independent Schools Athletic Association 1A girl’s tennis field with an unbeaten 11-0 record, another pair of area teams finished their week by splitting their matches.

Ridgecroft School fell to Oakwood in home matches at the Rose Tennis Center on the campus of Chowan University by a 5-4 final, but bounced back to shutout Gates County in Gatesville 9-0. 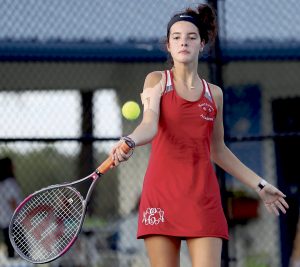 Gracie Boswell and Belle Turner scored a doubles win to open the Oakwood series with an 8-5 final. But the duos of both Matty Grace Gilliam and Claire Place along with Camille Pierce and Elizabeth Brown both fell to their Lady Eagles opponents. The doubles losses made a difference because the Lady Rams split the six singles matches. Gilliam and Boswell were winners along with Reagan Edwards in a tie-breaker.

Things fared much better for the Rams on Wednesday against Gates County. Gilliam, Turner, Boswell, Place, Pierce and Brown all swept singles matches in straight sets. Number-one and two doubles of Gilliam and Place, along with Boswell and Turner, captured straight set victories; while Edwards teamed with Sydney Jones to capture their match, 8-2, and complete the sweep.

Ridgecroft will participate in the Alice Cobb Memorial Tennis Classic in Wilson this weekend before hosting Northeast Academy on Tuesday, Sept. 24.

Speaking of the Lady Eagles, capturing two-of-three doubles matches helped Northeast Academy top Oakwood, 5-4. Carly Stephenson teamed with Emalee Jones for the #1-doubles win, then Jessie Martin and Lizzie Smith, the #2 duo also scored a win.  Roslynn Morris and Kierstyn Flythe failed to make it a sweep. The two opening wins helped as Stephenson, Martin, and Smith’s wins led to a 3-3 split of the singles matches, giving Northeast the victory. 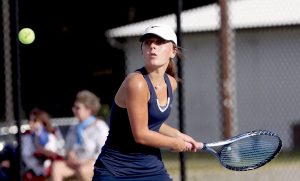 Northeast stayed on a roll with a 5-4 win over Northeastern High School Wednesday in Elizabeth City. The top three triumphed (Stephenson, Martin, and Jones) for a 3-3 split in singles matches, and the combos of Stephenson/Jones and Martin/ Smith helped send the Eagles to a second straight team win.

Northeast didn’t fare as well against Lawrence in a match that was interrupted last Thursday by storms and completed at the Northampton Wellness Center in Jackson on Monday. The Lady Warriors continued to set the pace in the East. Stephenson did post a 7-5, 6-0 win over Emma Cobb; and, Martin won 6-4, 6-1 over Hailey Hope Gardner. But Isabella Spruill and Perris Clayton captured wins for Lawrence. Northeast’s top two doubles teams won, but Clayton and Annie Hayes Trowell won in pairs to send LAW over the top.

The squeaker win over Northeast was the only close match for Lawrence last week. The Warriors posted 9-0 shutouts back-to-back against Bear Grass Charter School on Wednesday and Thursday, and earlier by the same score over Williamston Riverside. Spruill continues to march through the season unbeaten at 3-0. The doubles duo of Clayton and Trowell are also undefeated at 3-0. Lawrence has lost just seven matches out of 28 played – singles and doubles – all season.

Some good rivalry matches are set for next week with Northeast playing both Lawrence and Ridgecroft. Meanwhile, the Rams will be joined by the Warriors at the Cobb Classic in Wilson this weekend.