MURFREESBORO – Destroying more records than a Disco Demolition Night, the Chowan University football team rushed for a program best 418 yards and shattered the seven-year-old record of 365 set in 2012. It all led to a 70-16 win over visiting Alderson-Broaddus here Saturday at Garrison Stadium.

Bryce Witt threw for seven touchdowns breaking his own five-way tie for a single game.  The Sutherland, VA junior is now tied with Cameron Stover for most touchdown passes in a career with 53, and second place all-time with 5,121 passing yards. Witt threw for 289 yards on Saturday.

And, not to be outdone, sophomore kicker Jackson Brooks booted in 10 consecutive point-after-touchdown kicks for the second most in program history behind former All-CIAA First teamer, Nick Hahula’s 11-for-11. 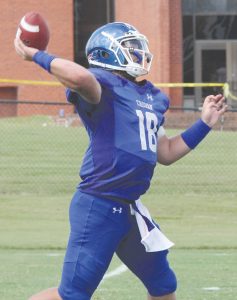 Chowan University quarterback Bryce Witt threw for a school record seven touchdowns Saturday in the Hawks’ home win over Alderson-Broaddus. That was one of three marks that fell in the 70-16 victory, Chowan’s first of the new season. Staff Photo by Cal Bryant

“This was 60 solid minutes of football,” a happy, but reserved, head coach Tim Place said after the game. “This team didn’t deserve what happened last week (a 40-22 loss at UVA-Wise). Offensively and defensively we expect them to play their best, and this is what happens when we just play together.”

The Battlers scored on their opening drive for a 6-0 lead, after a two-point conversion was missed. Chowan held its breath when senior receiver Tyrell Freeman went down with a knee injury the second time he touched the ball. But in came untested sophomore Deshaun Wetherington, and the running game never missed a beat. The Suffolk native would rush for 194 yards on 12 carries on the day and find paydirt twice. Meanwhile, at the A-B 20, Witt called his own number and scampered in for a 7-6 Hawks lead after Brooks’ kick.

“The coaches wanted us to just remember we could dominate this team,” said Witt. “We just had to take care of the little things.”

Despite picking off the A-B quarterback, Chowan had to punt, but the Battlers were stifled on their drive and a poor punt set up the Hawks at the A-B 25. On the second play of the second quarter Watkins caught a short 7-yard pass for a score and it was 14-6, Hawks.

Following a Battlers’ field goal trimming their deficit to five, Chowan scored two more times before the half: another Watkins end-zone reception and Wetherington’s first rushing TD, accounting for a 28-9 Chowan half-time lead.

Chowan dominated the third quarter with three Witt touchdown tosses, two to Watkins and the other to Dominic Floyd. Wetherington also romped to his second score, a 54-yard jaunt that helped make it 56-9 headed to the fourth quarter.

“I haven’t played since 2016,” said Wetherington. “So, I wanted to come out and show what I’m capable of; I’m used to being the featured back.”

For the first time since the fourth quarter, the Hawks’ defense allowed the Battlers to get past midfield. A-B capitalized with their second TD of the game, but trailed by 40, 56-16. Watkins hauled in his fifth and final touchdown grab, and Witt hit Torrance Brumfield with the last score of the afternoon, eventually putting the game to rest with a 54-point win.

“We knew what they were going to do,” said co-Defensive Coordinator Jeffrey Fitzgerald. “I only wish we could have gotten more turnovers (four).”

“We were just prepared for everything,” said defensive lineman Rafiq Abdul-Wahid. “We’ve got ballers on this team, and we’re eager to get better.”

Chowan (1-1) returns to Garrison Stadium this Saturday when they host Shaw University in a non-CIAA game beginning at 6:05 p.m.

Our loss is Heaven’s gain