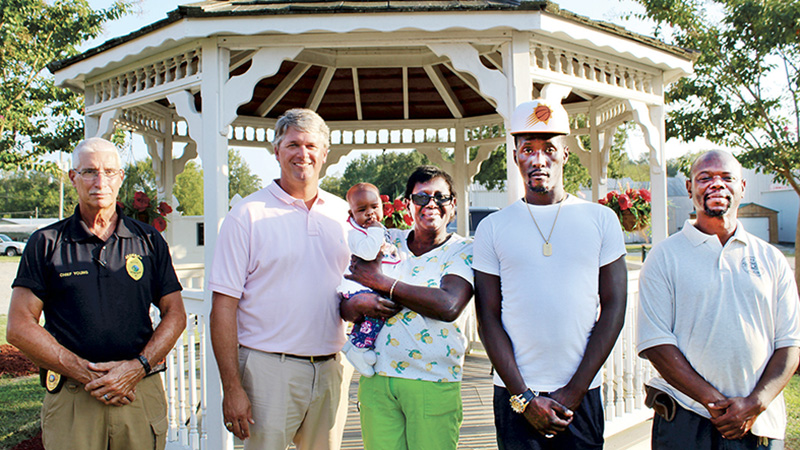 JACKSON – No one driving through downtown Jackson can overlook the small “pocket park,” a well-maintained area of greenery complete with a town clock and a gazebo, as they pass by. And if you talk to people who work for the town, they’ll tell you about someone else who couldn’t be overlooked either: Collie Jordan.

Now that gazebo in the park is dedicated in memory of Jordan who served the town for five decades in their Public Works Department.

An official dedication ceremony was held on Wednesday, Sept. 11 attended by family, friends, and fellow town employees who worked alongside Jordan.

Morris noted that it has been about two years since Jordan passed away, but they still haven’t forgotten his hard work.

“We wish he could still be here. He was a great asset. He worked pretty much up until the time he left us,” Morris continued.

Town Commissioner Billy Futrell recalled how well Jordan knew the town’s water system inside and out.

“We didn’t really need a map,” Futrell joked. “We had Collie. He knew where everything was.”

Early Boone, the town’s current Public Works Director, said he was glad Jordan took the time to show him everything he needed to know for the job.

“What I know about the town came from Collie,” he said.

Police Chief John Young agreed with their sentiments, calling Jordan “a walking map.” He also recalled many years on the job spent working closely with his fellow town employee.

“He was a tremendous friend, brother,” Young said. “We laughed so many times working together. He always had something funny to say. He loved to laugh.”

“I really miss him,” he added.

Jordan’s memory lives on with his family and in the work he dedicated so much of his life to, and now his name will also remain, etched on a plaque in the little gazebo which welcomes everyone to the town.