WINDSOR – If there is one word to describe former Windsor Mayor Robert “Bob” Spivey, it would be “champion.”

Not in a sense of athletics, but rather an advocate, promoter, visionary, torch-bearer, protector….the list goes on and on.

The Town of Windsor, the County of Bertie, and all of northeastern North Carolina lost a champion on Thursday morning when Spivey passed away at the age of 91.

Funeral services are scheduled for 11 a.m. on Monday, Sept. 16 at Cashie Baptist Church in Windsor. Burial, with Military Honors, will follow in Edgewood Cemetery. 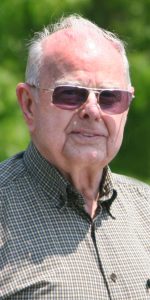 Current Windsor Mayor Jim Hoggard emphasized that people like Spivey come around once in a lifetime.

“I never knew of a man like Bob Spivey….the influence he had and the respect he was given,” said Hoggard. “He was great not only for our town, but for the entire region. We here in Windsor feel blessed to have him for as long as we did.”

“I listened and observed how he handled things then,” Hoggard recalled. “I find myself today in the job as Mayor doing a lot of the same things I saw Bob do over the years. Since I’ve been Mayor I’ve called on him numerous times about something from the past and he could recall even the minor details.

“We’ll all miss Bob. He set the example for others to follow. His legacy was always doing the right thing and doing it the right way,” Hoggard concluded.

Spivey’s vision wasn’t restricted only to his native town.

“He was a true gentleman, a true servant. And this extended beyond the town of Windsor, but to the rest of Bertie County as well as all of eastern North Carolina,” said Jon Powell of Powell & Stokes, Inc. and Bertie County Peanuts. “He had retired as mayor by the time I served as a Town Commissioner. Regardless of any situation the town was facing – especially the flooding we’ve had over the last several years – he was always positive and moving forward. He didn’t allow himself or the town to be dragged down by any situations.”

Lewis Hoggard, Director of the Windsor-Bertie Chamber of Commerce, watched Spivey work for the betterment of the town.

“He was at the forefront of every progressive that we’ve made in this town,” Hoggard noted. “He was not just a great leader, but he was also a great person. He did great work with Vidant Bertie Hospital and Vidant Medical Center where he was on both boards. He felt early on a great commitment to his country as well as the town.” Hoggard added that three of Spivey’s brothers were killed in World War II, where Bob Spivey himself also served.

“While I never served with him (in local government), I knew him very well personally and he respected everybody; a giant of public service who wanted everyone to work together. He was a fair man. This community has lost a giant, and I want to express my condolences to his family,” stated Bertie County Commissioner Ernestine Bazemore.

“When I traveled across the state and people found I was from Windsor, people would say, ‘Oh, yeah, Bob Spivey’,” Wilson remarked.

“While he was a champion for the hospital, the new buildings, and everything out there, he also helped secure the River Center. Even several months ago when I last talked with him, he was sharp as a tack. His mind was remarkable. He was a distinguished gentleman who loved Windsor, and who loved helping people,” Wilson added.

In the 1990’s, Spivey was among a small handful of local individuals that recognized the importance of ecotourism. He was at the forefront of the establishment of the Roanoke/Cashie River Center, a Windsor facility that offers exhibitions on the local environment, including a small amphitheater and a boardwalk along the Cashie River shoreline.

“He envisioned our potential and others followed his lead,” said Tom Stroud, Deputy Director for the Partnership of the Sounds. “While others were involved, the River Center was Bob Spivey’s vision exclusively at the start. He saw this as an opportunity to educate those here locally as well as visitors to our area about our rivers and our forests. He knew how this center could be used to bring others to Windsor and Bertie County.

“He was shown a great amount of respect, mine included, for what he accomplished in this town and the entire region. He was greatly admired and will be greatly missed,” Stroud added.

When the town’s old hospital shuttered its doors, Spivey pushed for a new medical facility. In 1998, University Health Systems of Eastern Carolina Inc. — it changed its operating name to Vidant Health in 2011 — took over Bertie Memorial. Part of the deal was building a $10 million, 48,000-square-foot Critical Access Hospital, the first of its kind in the nation.

Brian Harvill, President of Vidant Bertie Hospital and speaking on behalf of Vidant Health, said, “Bob Spivey was a wonderful man, who cared deeply about this community. He was the driving force behind Bertie Memorial/Vidant Bertie Hospital joining University Health Systems because he knew that partnership would help the hospital remain viable, and make it an even greater asset to Bertie County.”

Harvill continued, “He lobbied for a new hospital to be built, and was so very proud of the state of the art facility that we have today in Windsor. Fittingly, the chapel that was added to Vidant Bertie Hospital three years ago bears his name. Bob Spivey was a great man – a very great man.”

Another of Spivey’s projects was pushing for the US 17 Windsor Bypass, a $63.8 million project completed in 2008 that also included making improvements to the bypass intersections with US 13, Grabtown Road and NC 308/Sterlingworth Street. Interchanges at King Street and Wakelon Road also provide access.

Though the bypass redirects traffic out of the downtown business district, it does lead drivers through a commercial area with stores, fast-food restaurants and gas stations….another of Spivey’s visions to spur economic growth to his town.

“Bob Spivey attended numerous meetings about that bypass; wanting to know every detail on how it would impact Windsor while at the same time putting the finishing touches on a valuable four-lane highway from Williamston all the way to the Virginia line,” said former Windsor Town Administrator David Overton. “As it turned out, that bypass didn’t hurt our businesses here; rather I think it helped them as we’ve seen a growth of businesses along the bypass.”

Overton noted that he had the pleasure to work for two members of the Spivey family.

“J.B. Spivey, Bob’s father, was the mayor when I came to work for the town in 1964,” Overton recalled. “Bob later became the mayor and still held that position when I retired in 2003.

“Bob was an outstanding gentleman and a statesman,” Overton added. “He did so much that people don’t even know about, but yet Bob was the type of person who never wanted any credit for the many things he did. We lost a great man on Thursday.”

Spivey left a lasting footprint on Windsor and all of Bertie County. Those that admired his work honored his hard work in numerous ways, to include the Windsor Town Commissioners dedicating their meeting space in August of 2012 as the Robert B. Spivey Meeting Room.

He was also a driving force in the growth of Chowan University. That effort began in 1979 when he was elected to the first of five terms of service as a trustee. He served as chairman of the Board three times and chaired the Executive as well as Development and Business Affairs committees. He championed Chowan’s return to senior college status and chaired a successful campaign that provided financial resources for the four-year transition.

For extraordinary his service, Spivey was given the Baptist Heritage Award from Chowan University (then College) in 2001. In 2004 the Chowan Trustees granted him Trustee Emeritus status. He continued to serve as a member of the College Board of Visitors.

For his service to Chowan, his church, his community and all of northeastern North Carolina but mainly for his life as a committed Christian, the Board of Trustees voted unanimously to award him the Honorary Doctorate of Humane Letters at the Commencement service, May 14, 2005.