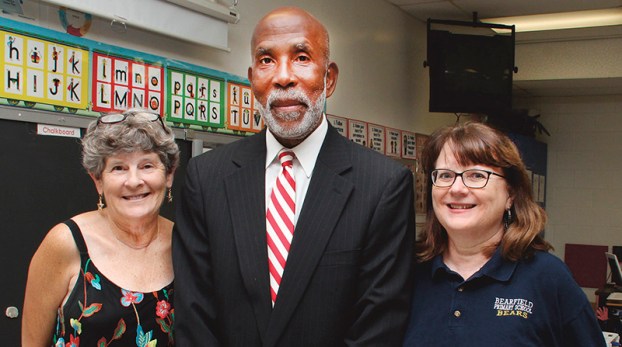 From left, Julie Shields, William Whichard, and Cathy Piland, all of Bearfield Primary School, were respectively named as Principal of the Year, Teacher of the Year, and Media Coordinator of the Year for 2019-20 in the Hertford County Public School District. Staff Photo by Cal Bryant

AHOSKIE – There’s always a first time for everything.

The Hertford County Public School District has announced the winners of the 2019-20 Principal of the Year, Teacher of the Year, and Media Coordinator of the Year. History was made as all three District winners came from the same school – Bearfield Primary where Julie Shields (principal), William Whichard (teacher) and Cathy Piland (media coordinator) earned the top honors.

Even though Shields is no stranger to earning the title of District Principal of the Year (she was previously honored in 2006 and 2013), she stressed this latest award is more special than the other two.

“This one made me reflect more on what has happened at Bearfield over the course of my time here,” Shields remarked. “It also means more because of the growth we’ve achieved in test scores over the past two years. We’re now above the state average and I want to see us to continue to grow. The students here are hungry to learn.”

Shields stated the reason she chose a career in education was due to the fact that she was inspired by her teachers while a student.

“I had fantastic teachers back when I was in school here in Hertford County,” noted the Ahoskie native. “I always wanted to give back to the community that gave so much to me.”

After graduating from UNC-Chapel Hill in 1975, Shields did eventually return to her roots, landing a teaching job in 1981 at Ahoskie Middle School. She also taught at Murfreesboro Middle School and Ahoskie Graded School before becoming assistant principal in 2001 at Bearfield. Two years later she moved into the principal’s chair.

Along the way, Shields furthered her education by earning a Masters of Elementary Education, and Administration and Supervision Certification, both at East Carolina University.

“I just love seeing children grow and learn,” Shields said. “Whatever I can do to make that happen, I’ll do it. I love this age group at Bearfield. What’s real neat to see now is another generation of children come in with their parents who I had the pleasure of teaching back in the 80’s and 90’s.”

“When I first took this job in 2015, I quickly learned that Mrs. Shields ran a school here that was very well organized and featured a very loving and nurturing environment,” Dr. Wright noted. “Nothing has changed between 2015 and 2019. She is our Principal of the Year due to the passion of her work, both here at Bearfield and in this community.

“She has transformed this community through her leadership,” Wright continued. “She is well-respected and is a natural leader. Now when we look at hiring new principals in our District, I invite Mrs. Shields to sit with us during the interview process. Her input is very valuable.”

For Whichard, it was only natural for him to become a teacher. His mother, Lydia, taught 1st grade for 38 years while his father was a 5th grade teacher until his death in 1970. Both taught in Gates County Public Schools.

Meanwhile, both of his sisters were educational administrators – Zenobia Smallwood (retired as Superintendent of Gates County Public Schools), and Venessa Harris (retired as a principal in the Portsmouth, VA School System).

“Both my parents taught at the elementary school level,” Whichard shared. “My father died when I was 13. My mother told me that I would go into education, following in my father’s footsteps. Being an obedient son, I didn’t go against what she said.”

Whichard graduated in 1975 from Gates County High School. From there he obtained a degree in Early Childhood Education in 1983 from Elizabeth City State University. He also served 21 years in the U.S. Army Reserves.

Whichard worked the majority of his teaching career in Portsmouth and Chesapeake, VA, spending 30 years instructing 3rd and 4th grade students before retiring as an assistant principal at William E. Waters Middle School.

He came to Bearfield in 2015, starting as a 2nd grade teacher and for the past four years has taught at the Kindergarten level.

His colleagues at Bearfield described Whichard as dedicated, hardworking, true to the profession, down to earth, persistent, outgoing, efficient, energetic, strong willed, a team player, and personable.

“I was humbled upon learning that I was selected as the Teacher of the Year representing Bearfield, and equally as humbled and appreciative upon being told that I was the Teacher of the Year for all our public schools here in Hertford County,” Whichard said. “I don’t like talking about myself; I feel I was hired to do a job here, to serve the children, and to work in a job that I honestly love.

“I can’t think of a better job to be in,” he continued. “We are preparing these children not only for their future, but for our future.”

Dr. Wright said it was clearly obvious to him that Whichard was a first-class teacher upon meeting him for the very first time.

“He stood out; his approach to education is impressive,” Wright noted. “When we look at the prototype for an educator, we see people like William Whichard.

“He interacts with his students extremely well,” Wright added. “He deals with issues with a very calm demeanor. The children respect him, even those he taught in previous years. If the region and the state see exactly what we see in him, he could very easily be the 2019-20 North Carolina Teacher of the Year. He’s that good.”

Piland has been a fixture at Bearfield since the school first opened its doors in 2000. The Hertford County native started there as second grade teacher and moved into the school library as the Media Coordinator in 2006.

“I feel we have one of the best media centers in all of eastern North Carolina,” Piland said proudly. “When I first started as the Media Coordinator here, our school had around 6,000 books. With the help of Mrs. Shields, our reading coaches, and our district office staff, we now house over 21,000 books.

“I am so fortunate to have the support of Bonnie Outlaw and Amy Tann who help me meet the needs of students and staff each and every day,” Piland added. “Also, the teachers and their instructional partners at Bearfield have supported my ideas about literacy and my efforts at creating Book Challenges for our students. Last year, we had 60 students in Kindergarten, first and second grades to read 100 books. We had 92 third grade students to read 20 or more chapter books. I could not have done this alone. Together the entire staff at Bearfield has worked to increase student’s literacy and test scores.”

True to her job as a Media Coordinator, Piland says a solid education starts with learning how to read.

“I believe books can take you anywhere,” she exclaimed. “They have definitely taken me beyond what I dreamed as a child. I’m the first college graduate in my family. Books changed everything for me and I try to share my passion for books and for reading with all the children here at Bearfield.”

For proof on how books can impact a child’s education, Piland mentioned the fact that the Book Challenge instituted at Bearfield helped its End of Grade test scores rise by 15 percent.

Piland, a 1978 graduate of Ahoskie High School, holds an Associate’s Degree from Roanoke-Chowan Community College and a Bachelor of Science in Elementary Education from Elizabeth City State University.

“My job is to match students with books, starting with something simple to help them grow their level of confidence,” Piland noted. “Now I see children that I taught come in this school with children of their own. They remember me and tell me what they have done as an adult. It makes you feel good, it’s so fulfilling that you had some sort of impact on their lives.”

“We have so many caring coordinators here in our district, they all work so hard,” she said. “I am proud to be the one, but I have to credit the entire Bearfield family for this honor.”

Dr. Wright credited Piland and her staff for being what he termed as “the hub of this school.”

“Kids are excited to go to the Media Center here at Bearfield,” he stressed. “She is part of the success at this school; she has helped create a positive environment for learning. Her demeanor, her disposition is razor focused on the needs of the children here. What I see in Cathy Piland is what makes Bearfield so successful. She is very deserving of our District’s Media Coordinator of the Year.”