Moving their high school football game up an extra two days from its regular Friday schedule in order to avoid the effects of Hurricane Dorian, Gates County found their rhythm in a 53-14 triumph over Bertie here Wednesday night.

Instead of resembling a rumbling, rambling Sopwith Camel bi-plane, these Red Barons looked more like a US Air Force fighter-wing squadron in dismantling the Falcons defense.

Gates finished with not one, but two, 100-yard rushers: 165 yards on 16 carries and a pair of touchdowns for senior DaQuan Drake, and 103 yards and three touchdowns for junior Cam Hurdle. 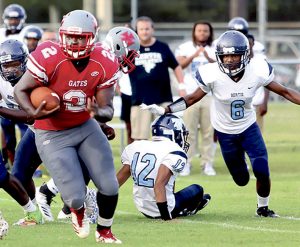 “Last week (a 22-19 Gates win over First Flight) was the good physical game to get us ready for what we faced tonight,” said ‘Barons head coach Matt Biggy. “We’re going to live and die by the run and establishing the line of scrimmage; but we’re still finding our way.”

Gates found a way to gain possession at the game’s beginning, when Bertie muffed the opening kickoff, setting up the Red Barons at the Falcons’ 29 yard line. Despite an early penalty, it still took them just four plays to find the end zone on a six-yard scamper by Jadyn Bond.

After a four-and-out by Bertie, Gates got the ball back on downs near midfield, and this time needed just two plays to find pay dirt: a 21-yard run by Drake before Hurdle rambled the final 27 yards to the end zone. Hurdle ran in the conversion, and it was 14-0, Red Barons.

Bertie then had a long clock-consuming drive that ended just shy of the red zone with the ball again going over on downs. Again, Gates – using all running plays – pound their way 78 yards to their third score of the night, this one by Drake. But the kick-after score was missed and it was 20-0, ‘Barons, with a minute still left in the first quarter.

Again, behind senior quarterback Isaiah Williams, Bertie made some solid gains in moving the ball to open the second quarter, but when the Gates defense stepped up, it produced results, like a third turnover on downs.

Gates’ fourth possession was a three-play affair, but sandwiched between the first snap and the score was a 61 yard dazzling run by Nasir Jones before Hurdle got his second score of the night.

Bertie again moved into Red Baron territory on this, their fourth possession, but again were stopped on downs. Gates had good field position at their own 34 to start, but it turned to disaster. Two costly penalties, a sack, and finally a fumble in the end zone led to Bertie’s first score, and Williams fell on a loose ball and got the Falcons on the scoreboard. A two-point conversion got their deficit under20, but they trailed by 18 points, 26-8.

Rather than using the ‘quick-strike’, Biggy opted for the old ‘few yards and a cloud of dust’ on the next time Gates had the ball. A 65-yard eight-play drive was topped off with Drake’s second score of the night. Two more points were added and 34-8 would also be the halftime score.

Gates opened the second stanza with a 64-yard nine-play drive the end result of which was Hurdle’s third and final score of the night.

Bertie had their best drive of the night on their first second-half possession. Juavonta Outlaw’s spectacular 84-yard kickoff return set the Falcons up at the seven-yard line. It took four downs, but Ronnie Futrell plunged over from the one-yard line for Bertie’s only offensive touchdown of the night. The point-after failed and it was 40-14, Gates.

The ‘Barons scored two more garbage touchdowns by their second unit to end the third quarter and by coaches’ consent, the clock ran the final 12 minutes for the 53-14 final.

Bertie’s best bright spot was Williams. Despite not playing the second half, he finished with 93 yards through the air (7-of-13), and 40 yards rushing on six attempts.

That ‘physical-ness’ for Bertie (0-3) will surely come next Friday (Sept. 13) at home against a Southwest Edgecombe team which just upset 4A South Central 62-27 on Wednesday. Gates County (2-0) is back at home on that same date, hosting Williamston Riverside.

Shootout in the Swamp