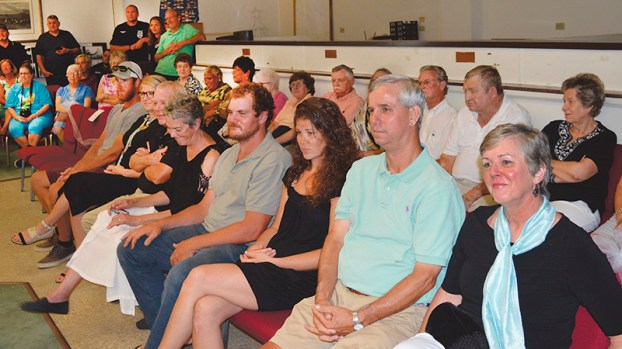 Family members of the late Dr. John H. Stanley sit on the front row as they listen to the accolades presented by friends and colleagues of the “country doctor” who passed away in March. Photo by Danny Bowman Jr.

WOODLAND – MD. My Daddy. My Doctor.

These were the sentiments of the family, friends and former patients of Dr. John H. Stanley, affectionately known as “Doc”. As we all know, MD stands for Medical Doctor, but according to the wall hanging in his office it meant something very different to the people gathered in Woodland Town Hall to honor this great man.

To many in attendance, MD meant “My Doctor”. They looked up to him not only as a common sense doctor, but as a father figure as well.

David Cooper, Mayor Pro Tem of Woodland, welcomed everyone to the event. Cooper stated that Dr. Stanley was born on January 12, 1927 and died on March 3, 2019 at the age of 92. He worked until his death.

Cooper remarked that the Woodland Town Board met and wanted to do something to honor and remember Stanley before his death. They asked him what he would like them to do and being the very humble man, he replied “nothing”.

The board decided to do a portrait and plaque telling what he had done for the town as well as his personal and professional achievements. Cooper expressed to Gen, Dixie and other family members that the board wanted to put it where it could be easily seen. They decided on the wall at Town Hall. 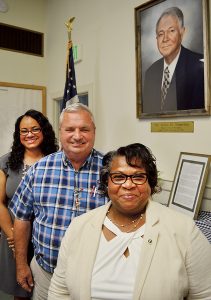 Northampton County Commissioners Geneva Faulkner (back) and Joyce Buffaloe (front) are shown with Woodland Mayor Pro Tem David Cooper as they stand in front of a portrait of the late Dr. John H. Stanley, which is now displayed in the Woodland Town Hall. Photo by Danny Bowman Jr.

Among the many hats he wore in Woodland, Stanley served 22 years as Mayor. He was a man of service. He also served his country in the military after graduating high school. After graduating medical school, he served his fellow man as a great doctor.

In addition, to being a full time doctor in Woodland, he was instrumental in developing a comprehensive Mental Health Care Program for eastern North Carolina. He served as Medical Director for the Roanoke Chowan Human Service Center for 27 years. He worked at the Northampton County Health Department from 1955 to 2016. He was the Coroner for Northampton County and a member of the medical staff at Vidant Roanoke Chowan Hospital.

“Did y’all ever see your Daddy,” Cooper asked. “He was a busy man.”

Dr. Stanley moved to Woodland in 1955 with his wife Geneva and set up a private practice that he ran for 64 years.

“In his later years, I worried about Doc parking across the street from the office because he said the parking spaces in front of his practice were for his patients. He would walk with his cane and his old dog, Bandit, slowly across to work each day,” Cooper noted.

Assistant Woodland Fire Chief Robbie Collier stated “Doc” served with the fire department for 44 years. On many fire calls they would both run from work and meet up at the firehouse.

“It was amazing to see a man in his late fifties or early sixties running and jumping onto a truck,” Collier exclaimed. “At that time you didn’t see many 80-year olds that could run a two-ton truck with a straight shift. He stepped aside when he was no longer physically able, but still attended classes and training drills. He helped and often headed up fundraisers to which he and others contributed woodworking items. He fulfilled his duties until his death.

“Dr. Stanley brought a lot of people into this world and he saved a lot of lives, mine included,” Collier added.

Ann Liverman Wright, a former patient and neighbor of Dr. Stanley, brought a medicine bottle from 1961 that at one time had contained oil for an earache. She said she could not bear to throw it away as it reminded her of Dr. Stanley and the town she grew up in and loved. Wright said she was a “frequent underfoot guest of his two cool daughters” and that “Doc and Miss Neva never minded her visits.

Wright stated that she later learned that Doc saved her life. When she was a toddler at her Big Mama’s house one Sunday, she found a juice can of kerosene behind the old stove. She took a few swigs of it and gave the can to her mother. Realizing what she had done they got Doc on the phone and then met him at the hospital. He had recently read recommendations on how to treat that type of poisoning. It recommended to not pump the stomach which they generally did. She was handed over to Dr. Boyette. Dr. Boyette and Dr. Stanley conferred, and they did not pump hers. At the same time there was a little boy with a similar situation who had his stomach pumped. She lived; sadly he did not. After nine days in the hospital she went home thanks to Doc saving her life. He went on to deliver four more children in her family, and each time he beat them to the hospital.

Wright mentioned that there were many, many families that Doc took care of in Woodland and the surrounding communities. She stressed that he selflessly never refused treatment, regardless of their ability to pay. He did many generous things that went way beyond doctoring.

She recalled memories of the sound and smell associated with his metal rolling stool at his office as well as the special apple blend of tobacco he smoked in a pipe.

“He was calm and comforting, quiet and caring and his demeanor was very intent almost like he could see through you,” Wright said. “Woodland was blessed to have Dr. Stanley as a resident, a neighbor, a friend, a talented physician, a caring advocate, a wise leader and an aspiring Hero.”

Cooper took the floor once more and led by revisiting what the town board could do to honor Dr. Stanley. They had the old bank building in town and after doing some research they found out they could make a Doctor’s office out of it. They talked to Doc about having another doctor come in before they went ahead with any plans. Next, they contacted and asked the Roanoke Chowan Community Health Center could they name it The John H. Stanley Building.

“They granted them permission to do so. Many hours of thought were put into this plan and we are happy things have come together,” Cooper noted.

He then turned the floor over to anyone in the audience that wanted to say a few words about Dr. Stanley.

Northampton County Commissioner Joyce Buffaloe said, “I did not meet him, but had family members he served.” They spoke highly of him, appreciating him not only as their doctor, but as a beloved friend. From the stories I have heard I feel like I knew him even though I never met him.”

“In a similar story to Ann Wright’s, he also saved my life,” Faulkner shared. “I like the taste of baby aspirin, so I ate the whole bottle when I was a child and he saved me.”

When Faulkner came home from college to get a physical exam, she recalled being mesmerized by his unchanging office.

“When I walked in it was like he already knew what was wrong with me and started writing a prescription,” Faulkner recalled. “He knew me truly inside and out from a baby to an adult.”

She thanked the family for sharing him with her, her family and the county and offered to assist them in any way they could from the town and county standpoint to help to honor his memory.

“Steward” Freddie Outland of the Pendleton Masonic Lodge was next to stand.

“Doc petitioned our lodge at the age of 90,” Outland said. “The Grand Lodge contacted Johnny Reynolds with concerns about him handling the extensive memory work involved in passing the degree work. Reynolds informed them that Doc’s mind was as sharp as a tack and not to worry. Masons traveled from Virginia, Raleigh, Roanoke Rapids and locally. Over 50 visitors attended. On three different special meetings he flawlessly recited the catechisms for the three degrees and other memory work required to hold lodge offices.”

Ms. Purnell told everyone that Dr. Stanley delivered three of her four sons and went on to tell about the time she met him at the office when she was in labor. He put her on the table, and she said, “Ain’t you going to help me.” He said, “It’s not time yet”. He sat on his little rolling stool and lit up a cigarette and continued smoking. She said, “I’m hurting now.” He said, “It’s not time yet.” After 20 minutes or so he rolled on over on that stool and said, “It’s time now.” She said, “He didn’t have to put his hands or nothing on you until it was time.”

Barbara Outland spoke up and said, “He has been my doctor for 54 years, he delivered my son, Scott, and he is still my doctor.”

Ann Wright’s mother Pat, responded, “I have you beat. He delivered five of my children and he beat us to the hospital each time.”

Cooper thanked everyone and invited them to enjoy the homemade refreshments and time of reminiscing.

Dixie Stanley Harrell she said her father had delivered 1,134 babies in Northampton County alone. This is not including the surrounding counties. She stated she is doing more research to get these totals.

He brought many babies into this world and saved many lives. Drop by Woodland Town Hall, read the plaque in his honor, and see the portrait of this much-loved man of so many awards and accomplishments. He was – and still is – the MD!

WOODLAND – It pays to have a broad imagination and a knack for turning those thoughts and vivid imagery into... read more