Power, to the people 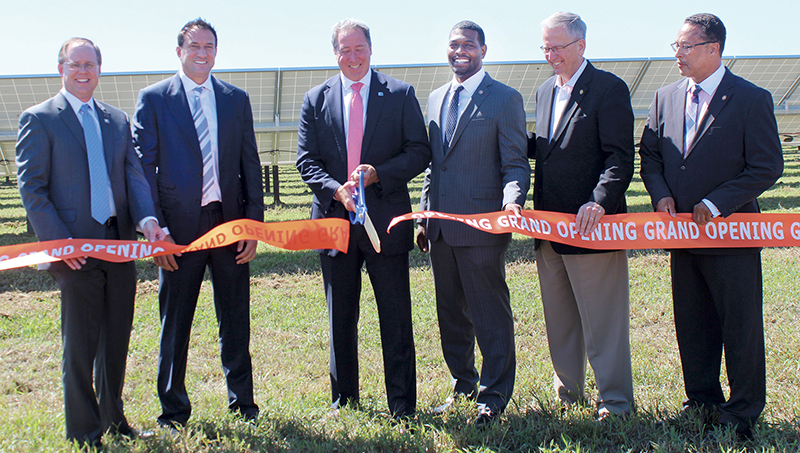 The Aulander Holloman Solar Facility is one of the largest solar projects in the United States.

The facility is expected to generate clean power that is more than or equal to the amount of energy the Cincinnati, Ohio-based bank uses in a year. The system is composed of about 440,000 solar panels using a single-axis tracking system and more than 2,000 inverters and related subsystems. The facility consists of roughly 120 MW DC of solar panels enabling the project to generate approximately 202,000 megawatt hours (MWh) of electricity per year.

The panels were installed over 1,400 acres in Hertford County, as the county’s 13th solar facility. For its construction, SunEnergy1 employed approximately 1,000 workers.

The Aulander Holloman Solar Facility was developed as a result of a virtual Power Purchase Agreement (PPA) Fifth Third announced in March 2018, with a groundbreaking that followed shortly thereafter. The agreement was designed to get Fifth Third to 100% renewable power, one of the bank’s five goals for environmental sustainability they intend to meet by 2022.

“We are extremely proud to be the first Fortune 500 Company to power up a single, solar project that will achieve 100% renewable power,” said Greg D. Carmichael, chairman, president & CEO, Fifth Third Bancorp. “This is another example of our commitment to improving lives and doing what’s best for our communities and planet—today and into the future.” 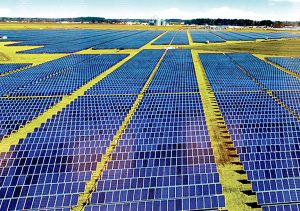 Over 440,000 solar panels dot the landscape off NC 11 for the Aulander Holloman facility. It will generate over 200,000 megawatt hours of electricity per year, allowing Fifth Third to operate its banks on 100 percent renewable power. Staff Photo by Gene Motley

“We’ve been buying renewable power for many years,” said Scott Hassell, Fifth Third’s vice president and director of environmental sustainability. “Fifth Third has worked for years to become more sustainable by using energy more efficiently and by lending to the solar energy industry. And we are thrilled to be on track to achieve our 100 percent goal in 2018, four years ahead of schedule.”

The electricity generated by the facility is expected to be an amount equal to or more than the amount Fifth Third uses in one year and will be resold at market rates into the local electricity grid wherever its banks are located, including in Charlotte.

“I’m pleased to say we’ve achieved our goal of reducing greenhouse gases by 25 percent, and today we’re pleased to say that with the aid of our partners, here in our key market state of North Carolina that we’ve risen to the top because of this great state’s economics and its geography.”

“The clean power generated will flow into the regional electricity grid, and for the duration of our contract, Fifth Third will be able to retire all of its renewable energy certificates from this project.”

Kenny Habul, SunEnergy-1 President and CEO, and developer of the Holloman Aulander project, said his company pioneered the concept of corporate and institutional power purchase agreements for solar power, and has done so for nearly a decade. SunEnergy-1 also has one of the largest energy pipelines in the United States.

“This is the first time that we have seen a corporation move to 100 percent clean power by purchasing all of the output from one project,” Habul stated. “The Earth is our vehicle through time so we congratulate Fifth Third for showing that companies can cut their emissions and improve the health of our environment today through solar power. We urge corporate America to stand up and join the 100 percent club.”

“People need to know how much you guys have pushed this, even going back to the early days; so, thanks for all you’ve done,” Hubul said.

Hubul acknowledged and thanked Ernie Evans, the original landowner, for the vision of wanting something that would help Hertford County with jobs and tax base.

“Well, Ernie, we pulled it off,” he humorously acknowledged. “This is a celebration because our challenges (hurricanes) meant the project took a bit longer, but we’re thankful to everyone on the team that we made up ground. It’s a miracle and we’re grateful it’s ready now sending power to the grid.”

Finally, Michael Regan, NC Secretary of the Department of Environmental Quality, said it’s more than reducing pollution and finding market-based solutions in doing so. He says it’s made North Carolina one of the top five states in the entire country for jobs created by the clean-energy industry.

“If we continue this, we’ll not only be ‘First in Flight’, but first in energy as well,” Regan noted.

“You guys are generating electricity, generating investment, creating economic development opportunities for this county, and all the while doing it by reducing carbon emissions from over 20,000 homes,” the Secretary illustrated. “Today, it’s about highlighting the power of corporate responsibility, and closing the gap that exists in North Carolina between our urban and rural communities.

“In terms of the types of investments we’re seeing today, this is really good for the economy, the environment, for infrastructure, and in eastern North Carolina it’s a little bit of a ‘chicken-and-egg’ scenario,” Regan said. “These types of investments will bring jobs, will bring big companies, and that’s what we need to see. Environmental protection and economic prosperity are not mutually exclusive, they go hand-in-hand, and we need more bipartisan support like we’re seeing here in Hertford County all over the state for clean renewable energy.”

Following the remarks, there was a formal ribbon-cutting and visitors were allowed to tour the facility.

Dorian: when, where, how much?