Mr. Byrd was born in Nansemond County, Virginia on November 27, 1928, and was the oldest son of the late J. Pressley Byrd, Sr. and Dorothy Lamb Byrd. Retired from the Gates County ABC Board, he was member of Suffolk Christian Church, the Sunbury Investment Club, the Sunbury Ruritan Club where he served as President for three terms, and was a charter member of the Cypress Chapel Ruritan Club. An Army veteran, he served during the Korean War. 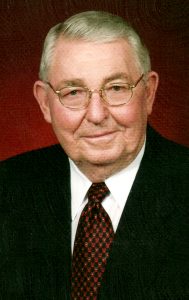 In addition to his parents, he was preceded in death by his son, David Allen Byrd; sisters Janie B. Aston and Rachel B. Brinkley; and by his brother, Beverly F. Byrd.

Surviving are his wife of nearly 67 years, Eloise Bunch Byrd; two daughters, Robin Byrd Huffman (David) of Burlington and Pamela Faye Conklin (Robert) of Colonial Heights, VA; seven grandchildren, Landis Huffman of San Francisco, CA, Reid Huffman (Rachel) of Nashville, TN, Langdon and Brandon Conklin, and Nathan, Tyler, and Lanie Byrd, all of Colonial Heights, VA. He is also survived by many nieces, nephews, and their families, and by a special family friend, Jeanne Hurlbert of Baton Rouge, LA, all of whom he loved dearly.

Following a private burial service for the immediate family, a service celebrating his life was held Tuesday, September 3 at Suffolk Christian Church, conducted by his pastor, The Reverend Michael D. Halley. A reception was held in the fellowship hall of the church immediately following the service.

Miller Funeral Home, 304 Main Street, Gatesville, assisted the family with arrangements, and online condolences may be made by visiting www.millerfhc.com.