Even though the current track of Hurricane Dorian (as of Thursday it appeared to be headed towards Florida) doesn’t appear to later threaten the North Carolina coast, it still serves as a reminder to never let your guard down during hurricane season. 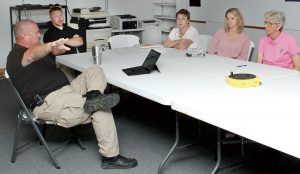 The training kicked-off with the county’s ranking officials (the Control Group) – County Manager Natalie Rountree, Board of Commissioners chair Linda Hofler, Schools Superintendent Dr. Barry Williams along with Board of Education chair Ray Felton and Jeremy Wright, Director of Student Support, and Melissa Lawrence, Assistant to the County Manager and the county’s Public Information Officer.

“We’re in the peak of our hurricane season now; a lot of our previous major hurricanes came in September and October so this is a great time to conduct this exercise,” Winn noted.

Winn remarked that every tropical system is different, comparing the destructive winds of Hurricane Isabel (2003) and the flooding rains of Hurricane Matthew (2016).

“No hurricane uses the same playbook, but we have to devise a plan to deal with whatever Mother Nature throws our way,” he said. “What we’re doing today is talk about responsibilities – who does what, when they do it, and where they do it.”

“We open the book, we look at who is responsible for what, and make sure everybody is good to go,” Winn said. “From that point forward we rely heavily on weather briefings from the National Weather Service Office in Wakefield (VA). We then base what we do based on those briefings, to include putting an evacuation plan in place and getting with the school officials here to begin plans to open up storm shelters.”

Storm surge does not present a danger in Gates County due to the fact that the majority of its land mass along the Chowan River is swampland. However, when a tropical system dumps up to 30 inches of rain, flooding does become an issue, Winn said.

“That’s why it’s important to prepare for the worst and hope for the best,” Winn acknowledged. “It’s also important to learn what we did wrong from past storms and correct them.”

Winn said the first step in the process when a major storm is heading this way is to declare a disaster declaration….a state of emergency. That document – co-signed by the Chair of the Board of Commissioners and the Mayor of Gatesville – allows the county to receive state and federal assets. It can also allow the county to issue evacuations, travel restrictions, set curfews, and prohibit the sale of alcohol, firearms, and ammunition.

“If we don’t do that process correctly, it costs us financially in the end,” Winn stressed. “We have to have a Hazard Mitigation Plan.”

Once the emergency declaration is in place, Winn said the next step in the process is contacting Dr. Williams to open up evacuation shelters in the county’s schools. The Red Cross and Gates County DSS are also included in that call as they assist in the operation of shelters.

“Additional logistics with opening a shelter includes moving in cots and setting up a source to feed those evacuees,” Winn noted. “We even have a shelter for pets.”

The emergency declaration also allows Winn to contact highly skilled outside agencies to come in and assist the county. There’s no cost for that, he said, other than to house and feed them.

“We also need to develop a plan for debris management, especially needed after a major wind storm,” Winn suggested.

The discussion also touched on information sharing, using the media (TV, radio, newspaper) along with Facebook (on the Gates County Emergency Management’s page) to give citizens the latest updates on closings, shelters, availability of water and ice, etc.

Other needs were topics of discussion, such as generators. Winn said getting them in place is only half the battle; “you have to have fuel in place to operate that generator and a maintenance plan in case it begins to break down after heavy use,” Winn observed.

“We’ve learned something from everybody else’s disasters,” Winn added. “When Hurricane Florence spared us, we went and helped those impacted by that storm. We were able to learn a lot about what works and what doesn’t work. You can bring that back to this table, helping us better prepare for our next storm.

Winn said the jobs of the Support Group are very important. He mentioned examples such as the Tax Department who is involved in post-storm damage assessment; and Building & Grounds Department that serves a logistical responsibility.