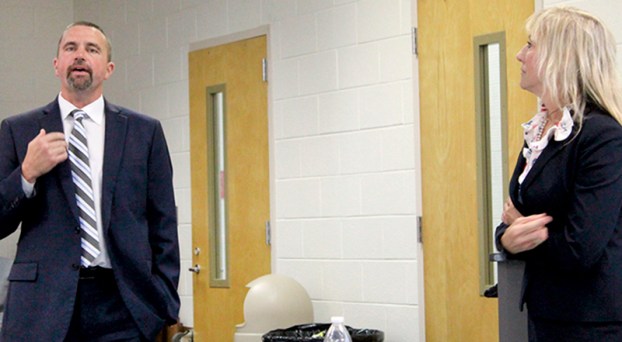 Last of a series

That’s what LaVern Coulton-Harrell said as she addressed the participants of a human trafficking training seminar held Aug. 21 at Roanoke-Chowan Community College. Coulton-Harrell is the Human Trafficking Site Coordinator for Roanoke-Chowan S.A.F.E, the local organization which co-sponsored the training for law enforcement, prosecutors, and service providers throughout the four-county area.

“We cannot take care of this problem without coming together. This is a team effort,” she explained.

While the beginning of the day-long seminar focused on explaining the crime of human trafficking and how it affects victims, much of the rest of the training focused on emphasizing how to work together on the issue because so many different people are involved in helping the victims every step of the way.

Kiricka Yarbough Smith, who is the Project Administrator for the NC Council for Women and Youth Involvement Office, offered tips to service providers on how different agencies and organizations can work together throughout the whole process, from the moment when victims are discovered to getting them back on their feet away from their abusers.

“The reality in rural communities is there’s not enough people to do the work, but the work has to get done,” Smith said of why collaboration between agencies is so vital. “We all have to sometimes cross into each other’s lanes just a little bit to get the work done.

“A lot of times people don’t want to lean on each other. But with human trafficking cases, we can’t have that because it’s so complex and there are so many issues,” she continued.

She urged clear communication as one of the best ways to work together effectively, and also said it’s good to acknowledge mistakes and continually work to improve.

“We’re not always going to get it right,” she admitted.

Jane Jackson, Assistant US Attorney for the Eastern District of North Carolina, and Rick Hoffman, retired Major from the Raleigh Police Department, spoke about how to investigate human trafficking cases from a law enforcement perspective, but also emphasized the importance of having everyone work together.

Hoffman also added that victims often get drawn back to their traffickers because they’re the people who’ve been providing for their needs. He urged law enforcement to work with service providers to make sure victims are getting access to resources they need, so they don’t feel a need to return to their abuse.

Smith pointed out that “success” in these kinds of cases may look different to each person. For service providers, their success may be making sure the victim has access to all of their necessities. For law enforcement, success can take the shape of getting the trafficker off the street.

But despite the different visions of success, the end goal is always to stop human trafficking.

With the importance of collaboration in mind, Roanoke-Chowan S.A.F.E. is currently forming a coalition of local organizations and people to fight back against human trafficking in the area. Coulton-Harrell said the training seminar was only the first step in building those collaborative bridges.

These areas include the four county Roanoke-Chowan area as well as Edgecombe, Nash, and Wilson counties. Roanoke-Chowan S.A.F.E. is partnering with S.A.F.E. of Rocky Mount to coordinate efforts in those areas.

The project is supported by a grant from the North Carolina Governor’s Crime Commission.

Coulton-Harrell told the News Herald after the training concluded they had received contact information for people from law enforcement, school systems, social service workers, and other agencies who were interested in being a part of the coalition.

The first coalition meeting will be on Tuesday, Sept. 24 at the REA building in Ahoskie. A “Human Trafficking 101” session is scheduled for Oct. 3 at the Hertford County Public Library in Winton.

Anyone who would like to help out can contact Coulton-Harrell at R-C SAFE by calling 252-332-1933 or emailing lavern.rcsafehtsc1@outlook.com

“We cannot do this alone,” she concluded.