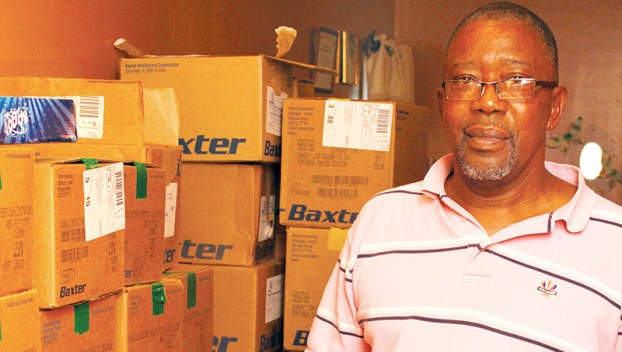 In his pantry, Casey Harris stores some of the many boxes of medicine he has to take for his condition. Though expensive, the pharmaceuticals lessen the pain of his condition until a suitable kidney donor can be found. Staff Photo by Gene Motley

POWELLSVILLE – For 12 hours, overnight, Casey Harris’ blood is removed from his body, filtered, and cycled back in.

It’s called hemodialysis, and for the former corrections officer it is also called a lifeline.

Originally from Tarboro, Harris moved east 16 years ago after meeting and marrying his wife, Joyce. For 10 years he worked for the Department of Public Safety at the Bertie Correctional Institution in Windsor, mostly on the night shift. Then in the fall of 2016, what he thought was a mild illness grew into something life-changing.

“I kept getting sick from time to time, nothing major I thought, because it would just go and come,” he relates to a visitor seated in his living room. “It was just nausea, but it seemed to get worse, and that’s when my supervisor recommended that I go home.”

Harris left for that first day; but gradually, his body weakened.

“It would take me 45 minutes to make it from here to the house across the street, that’s how much pain I was in,” he acknowledged. “The day they sent me home, I drove only half a mile before I had to call my wife and she came and drove me to the hospital straight to Greenville.” 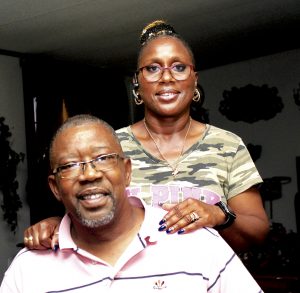 A thorough examination at Vidant Medical Center revealed the cause, but the news was not encouraging. What was first believed to be kidney stones, Harris would later find out he was suffering from polysystic kidney disease, or PKD, an inherited chronic form of renal failure.

“I found out that was what my Dad passed away from 18 years ago,” Harris noted.

Harris then spoke to his five other living siblings and encouraged them all to undergo the exam.

“Four have gone (for the exam), but one of my brothers is a little nervous about going because he says he hasn’t had any symptoms yet. I told him until I got struck down; I hadn’t experienced any symptoms either. It just hit me all at once,” Harris said.

Harris says a review of his dietary habits revealed that starchy foods and an abundance of caffeine contributed to his kidney stones.

“If I drink it now, I have to drink decaffeinated,” he admits. “But thank the Lord, since 2016; I haven’t had any kidney stones.”

In addition to his 12-hour in-home dialysis which takes place overnight, Harris also has a much shorter daytime exchange, usually in the mid-afternoon and no less than four hours before his overnight exchange. He also takes some 80 pills.

“My doctors, they don’t stress me about which time (of day) I do it, as long as I get it done,” he declares.

Harris took retirement from DPS in late 2016 following his diagnosis, and he is currently on disability, but facing mounting medical expenses.

“If it weren’t for services and people helping me, this would be something else,” he said. “I still have my regular bills.”

Currently, Harris is on a list for a transplant, but admits it’s frustrating that there are more deceased donors than living ones.

“That’s what frustrates you,” he admitted, “that there are so many living folks unwilling to give up a kidney.

Doctors have advised him that a transplanted kidney from a living donor could last as much as 15-20 years; while the scale for a deceased donor is approximately seven years.

Harris credits a support group, beginning with his wife, then his son in Virginia, and grandchildren in the Raleigh area.

“If it weren’t for them – especially my wife – I don’t think I would have the mind I have right now,” he says. “On both sides of my family I’ve got some voices that keep me going; and I have to credit my church members and neighbors since they know my (dialysis) schedule and they keep me straight.”

Harris says he’s never been depressed throughout his entire ordeal; his constant has been his deep faith.

“I know this has all happened for a reason,” he stated. “I believe the Lord will give me a kidney. I try to deal with it.”

Not everyone is eligible to be a kidney donor, and any potential donor, must be screened for health issues before they can be considered. In the meantime, Harris continues on a national waiting list, and the family remains hopeful.

Earlier in August, the Harris’ attended a meeting in Greenville on ways of spreading the word to those who may be unaware of his situation.

“People aren’t going to help you if they don’t know,” he surmises.

Together with his support group, Harris is planning to print flyers and T-shirts to help communicate his situation.

“My family is willing to wear them and hand the flyers out,” he noted with pride. I don’t think negatively. This has all happened for a reason.”

Harris says because he has avoid high phosphorus food items he watches his dairy intake, primarily milk and cheese; and that’s caused him to miss out on one of his favorites he’s loved since childhood.

“You wouldn’t believe this,” he admitted with a laugh. “But first thing in the morning, I really miss a nice big bowl of dry cereal.”

Part 2 of a 3-part series AHOSKIE – A key component to dealing with human trafficking cases is understanding the... read more