AHOSKIE – A key component to dealing with human trafficking cases is understanding the different kinds of trauma survivors go through.

A recent training seminar held Aug. 21 at Roanoke-Chowan Community College covered the complex topic of human trafficking and addressed ways for law enforcement, prosecutors, and service providers to work with victims. The day-long seminar was sponsored by a collaboration between Roanoke-Chowan S.A.F.E., UNC-Greensboro, S.A.F.E. of Rocky Mount, and NC Stop Human Trafficking.

Amanda Gopal, a licensed clinical social worker based in Asheville, conducted a session about victim trauma, specifically dealing with sex trafficking survivors. Her goal is to help the participants—who came from throughout all four counties of the Roanoke-Chowan area—learn to see things from the victim’s perspective and then apply that to how they deal with human trafficking cases in the future. 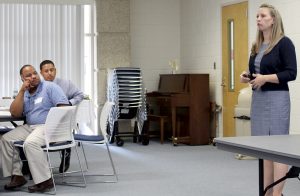 “We’re working with victims with thousands and thousands of sexual assaults they’ve had to endure and get through to survive. It’s astounding. So we’re talking about an immense amount of trauma,” Gopal said of sex trafficking survivors.

Every survivor is different, she noted, but there are usually three common themes they all share.

“The second is they’ve lost all sense of safety. Physical safety, emotional safety, psychological safety. So their life becomes trying to establish safety.

“Another theme is loss of predictability. Traffickers will intentionally take away the predictability because it’s another form of control,” she added.

Gopal emphasized the best way to start providing services to a victim is to try to give control, safety, and predictability back to them. This can be as simple as asking the victim which room they’d like to sit in while answering questions and explaining the process they’re about to experience.

Much of Gopal’s presentation was centered on explaining different coping methods and defense mechanisms victims often rely on during and after their trauma. These methods can sometimes make it more difficult for law enforcement to conduct an investigation or service providers to help the victim.

For example, victims often want to avoid talking about their trauma. Encountering triggering reminders of the ordeal can make it worse. Triggers can include innocuous things like a certain time of the year or a particular hotel chain. Sometimes victims may even dissociate from the experience in order to process it.

Gopal encouraged responders to keep these things in mind when interacting with victims.

“They’re not going to act in the ways we think they should. We have to take a step back sometimes and look underneath the behavior,” she said.

Trauma bonds are another coping mechanism that makes things more complicated for the victim’s recovery.

“People really become truly bonded and attached, genuinely have positive feelings towards their abuser,” Gopal explained. “These are really effective at controlling a victim.”

The bond, which is commonly referred to as “Stockholm Syndrome,” becomes even more complex when the trafficker is a family member. Gopal compared the experience as being similar to victims of domestic violence. She also noted that some victims can relapse and get drawn back into their abusive situations because of these bonds.

“We have to anticipate this [relapse] for the survivors that we’re working with,” she acknowledged.

Gopal concluded her presentation by detailing the way the brain itself responds to trauma and why this makes survivors behave the way they do.

Many people assume sexual assault victims, for example, would fight back in a dire situation, but if the amygdala, the part of the brain’s limbic system which serves as the body’s alarm system, determines there isn’t enough energy for a “flight or fight” response, then it sends the body into “toxic immobility” so the victims freeze up. That automatic response has nothing to do with the part of the brain which is responsible for decision making.

“The way people respond under stress and in moments of terror is not a decision they made,” she said.

Another example is how the memory process can be interrupted or messed up during stressful situations. The hippocampus in the limbic system is responsible for memory, but memories aren’t on the priority list when the brain’s stress response kicks in. That’s why survivors can have trouble remembering what motel they were at or what day the trauma occurred, but can clearly remember details like what shoes they were wearing at the time.

“If we can understand what’s happening and why this is happening, it can give us a little more compassion,” Gopal concluded.

The kinds of things Gopal covered during her session were reinforced later in the training when a human trafficking survivor shared her own story. The survivor explained her abuse as well as the experience she had with law enforcement and service providers afterwards.

Some of her interactions with people who were supposed to help her out of the situation were quite negative. At times she shut down during questioning because she still felt unsafe and felt like she was being treated as a criminal. Other times she could not recall all the necessary details to corroborate her story which made police question her honesty.

Pam Strickland, Founder of NC Stop Human Trafficking, facilitated the discussion with the survivor, and encouraged people to learn from her story in order to avoid the same mistakes when interacting with other human trafficking victims.

Next in the series: working together to fight human trafficking.