Shootout in the Swamp

WILLIAMSTON – If game-one was any indication, both Bertie and Riverside High Schools are in for a heckuva year.

In a tale of two different halves of football, both teams scored seven times in a wild shootout affair at the bowl-shaped pit-like stadium here that Riverside fans lovingly call ‘The Swamp’. But in the end, it was the Knights who drew their swords to slay the Falcons, 54-50.

“If you’d have told me a game I thought would end up in the thirties finished up a 104-point nail-biter, I’d have never believed it,” cracked Riverside coach Asim McGill after the game.

“We battled through adversity,” crowed Bertie coach Grantley Mizelle. “I am just so proud tonight of my kids for their guts.” 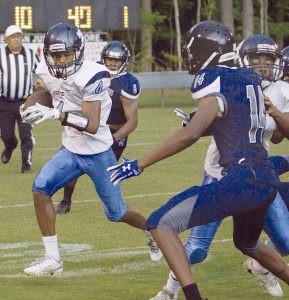 The game was just a few minutes old when high winds, lightning, and a torrential downpour sent fans scrambling for cover at the nearby gymnasium. But not before Riverside took advantage of an early Bertie turnover the Knights turned into an 8-0 advantage after a short touchdown and a two-point conversion.

When the game resumed an hour-and-a-half later, Bertie had a chance at the equalizer, capping a seven-play drive with a one-yard plunge by Marcus Jenkins. The conversion failed, leaving the Knights still in front, 8-6.

Riverside scored twice more to build a 24-6 advantage by early in the second quarter before Falcons quarterback Isaiah Williams went in from one-yard out that pulled Bertie within 10 at 24-14.

But after a pooch kick left the Knights near midfield, Javion Griffin found the end zone on a five-yard scamper and pushed the Riverside lead back to 16 at 30-14.

It only took Bertie two plays to get it under a 10-point game again. Williams hit Jerome Gaynor on a short flair in the backfield and Gaynor turned the corner, streaking down the sideline for a score that made it 30-22 after the conversion.

Riverside was ahead 38-22 and Bertie was driving to score just before the half, but Williams coughed up the ball scrambling for short yardage and Jaylen Williams scooped it up and raced 78 yards to give the Knights a 24 point advantage, 46-22, at halftime.

Riverside fumbled on their first third quarter possession and the Falcons pounced. Williams again pitched to Gaynor and the speedy senior saw nothing but green in front of him as he outraced the Knights defenders to pay dirt, pulling Bertie closer at 46-28.

The two teams exchanged turnovers, before Jenkins hauled in another strike from Williams and the Falcons were creeping closer, as it was now a 10-point game again, 46-36.

The Falcon defense rose and stopped a Knights drive on fourth-down, giving Bertie great field position at the Riverside 33. Williams hit Gaynor for a 30-yard gain down to the three-yard line before calling his own number for a touchdown and a two-point conversion. Suddenly, it was a two-point game, with Riverside only in front, 46-44 with eight-and-a-half minutes left to play.

Both teams punted as a slight drizzle began to fall. But on Riverside’s next possession, Griffin, on a halfback option, was intercepted by Bertie’s Juavonia Outlaw with 3:45 remaining. Three running plays had the Falcons knocking at the red zone, and with 2:19 left to go, Williams hit Tykeen Freeman over the middle and the sparse, drenched, but lively Bertie crowd was cheering at the Falcons’ first lead of the night, 50-46.

However, their joy was short-lived. On the ensuing kickoff, Griffin found daylight down the right side, followed some early blocking before letting his speed do the rest and his 76 yard kickoff return for a score turned Bertie’s joy to anguish, as it became a 54-50 Riverside lead.

Bertie had one final chance, but Williams was sacked on fourth-down and Riverside just ran out the clock to preserve a four-point opening night win.

“We won the second half,” said an exasperated Mizelle afterward, “and that’s a credit to our conditioning. We’ve got some things to work on like tackling, penalties, and taking care of the ball, but we’ll be alright.

Next up for Bertie (0-1) is Edenton Holmes at the Falcons’ home opener this coming Friday night, 7 p.m. at Roy Bond Stadium in Windsor. Riverside(1-0) hits the road for Plymouth and a date with Washington County, facing former Bertie assistant, now Panthers head coach, William Hunt.